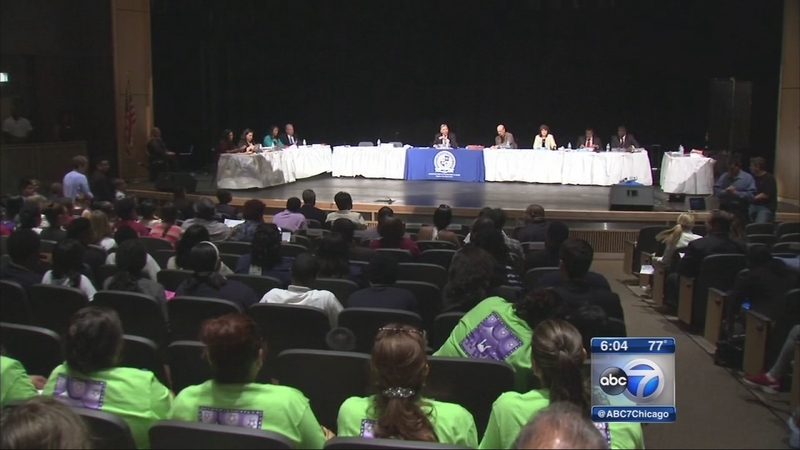 CPS board to discuss borrowing more than $1 billion

CHICAGO (WLS) -- The Chicago Public School board has approved borrowing more than $1 billion for operating costs and its teacher pension payments.

The interim head of CPS put the district's financial woes in blunt terms at a meeting Wednesday night.

"Without the help of lawmakers in Springfield, we face the tough decision of paying our pension obligations or operating our schools at the caliber that we believe should be operated for our students," said Jessie Ruiz, interim CPS CEO.

The meeting, heavily-attended by parents, students, community groups and members of the Chicago Teachers Union, comes as the school board faces a Tuesday deadline to make a $634 million teacher pension payment.

The meeting comes a day after a measure failed in the Illinois House in Springfield that would've extended that Tuesday pension deadline to Aug. 10, the day school districts would receive an influx of state money.

The House could vote on that deadline extension again on Tuesday, the day the payment is due.

The CTU continues to accuse CPS of manufacturing a fiscal crisis as contract talks play out.

"Boards moved a little bit, they've made some proposals that our members like, there's a member bargaining committee that is listening to the proposals, they've also made some really offensive proposals so we'll see where we're at," said Kristine Mayle, CTU.

CTU President Karen Lewis is not at the school board meeting, as she's in a bargaining session, but she told reporters on Tuesday that the two sides were "very close" to an agreement.

But the union officers in attendance at this meeting are indicating that talks will continue.