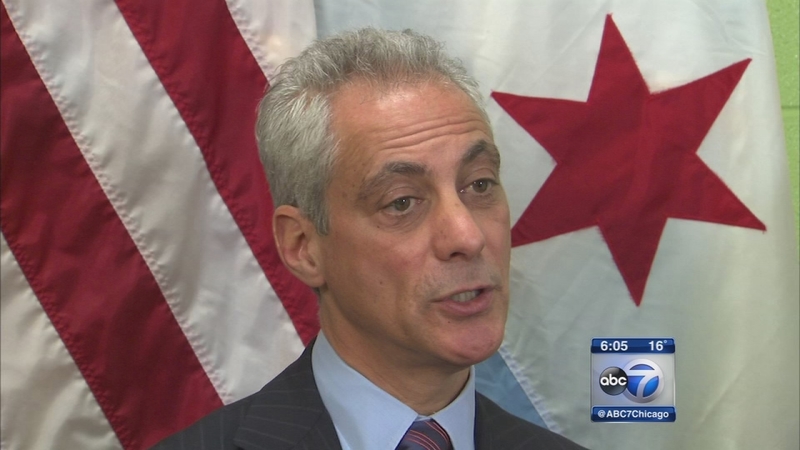 CHICAGO (WLS) -- After a key deadline passed for an agreement to prevent teachers' layoffs in Chicago Public Schools, Mayor Rahm Emanuel and Governor Bruce Rauner appeared optimistic a deal could be reached. The mayor and governor suggested the fact there were no layoff notices delivered Monday is a positive sign.

To put faces on CPS academic gains, the mayor met with college-bound students at Juarez High School. In an ABC7 interview, he suggested progress in talks to resolve the CPS deficit.

"We have good negotiations going on and our goal is to do something that's beneficial for teachers, students and the taxpayers," Mayor Rahm Emanuel said.

Without a half billion dollars in state aid or an agreement by teachers to pay more of their own pension costs, the district had threatened to layoff thousands of teachers by February 8, when the second semester begins. The required 21-day notice in the union contract expired Monday.

"We're having good conversations with the teachers union," Emanuel said.

The Republican governor continues to insist he will not sign off on state money until his pro-business, anti-union turnaround agenda - or elements of it - are approved. State Rep. Ken Dunkin (D-Chicago) said CPS' dire situation is forcing his party to make a deal with Rauner.

At Juarez High School, CPS Chief Education Officer Janice Jackson said she is planning for a second semester without any classroom changes.

"We know that the classrooms are important and we intend to protect them at all costs," Jackson said.

The mayor would not answer when asked if the near-term plan included the credit-challenged CPS borrowing more money. He said the long-term answer must originate in the state capitol.

"What I ask the Governor, the Speaker, the Senate President and all of Springfield: back up the hard work these students, their parents, teachers and principals have done," Emanuel said.

The mayor said he did not believe his own political situation - some say he's weakened by the police misconduct scandal - has affected his ability to negotiate a deal to rescue CPS.

Rauner - while acknowledging talks continue - would not guarantee a positive result.