Republican leaders unveil proposal for state to take over CPS 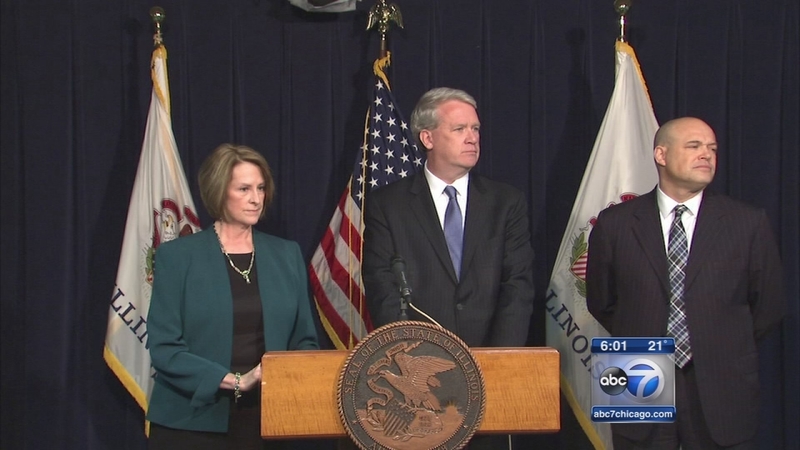 "We are throwing Chicago and CPS a lifeline," Durkin said.

The suburban lawmakers will introduce two bills: one to have the fiscally-troubled city school district overseen by a state authority, and another to give that authority - as well as other local governments - the option to declare bankruptcy when debts become unmanageable.

"It is a means to restructure debt. It's not a 'get out of jail free', it's not a corporate sale of assets but rather an organized, time-tested mechanism that could help," Sandack said.

State control and the bankruptcy option is the Republican answer to Mayor Rahm Emanuel's request that the state - with its own fiscal issues - appropriate half a billion dollars to avoid massive CPS teacher layoffs.

"I believe we could avoid layoffs if we act quickly. I do not want to see a single teacher lose his or her job in Chicago," said Gov. Bruce Rauner.

Rauner is behind the GOP plan in response, he says, to what he called the mayor's fiscal "failures."

"We believe that bankruptcy should be an option for Chicago Public Schools and the city of Chicago as we deal with this financial crisis," Rauner said.

Mayoral Spokeswoman Kelly Quinn wrote "the Republicans in Springfield are trying desperately to distract from their own failures."

Emanuel was in Washington, D.C. at the U.S. Conference of Mayors.

"He doesn't know what to do. So he's stuck and he's running away from his responsibility as the Mayor of Chicago," said Gregory Livingston, Coalition for a New Chicago.

Democratic legislative leaders who will decide whether votes are called on the Republican bills both oppose Rauner's plan. House Speaker Mike Madigan wrote of the governor: "He's more interested in driving down the wages and standard of living of middle class families."

"This is an example of a governor who has failed to pass a budget in his first year in office, saying let me take over the budget-making for another unit of government. Again, it would almost be funny if it weren't so tragic," said State Rep. Christian Mitchell.

"I am furious, furious that Speaker Madigan has held our school systems hostage to this budget crisis," Rauner said.

THE IMPACT OF A TAKEOVER

Just what would the takeover plan would mean for students, teachers and Chicago taxpayers?

Just what would the takeover plan would mean for students, teachers and Chicago taxpayers?

Experts say bankruptcy involving school districts is more complicated than just declaring that a system is a financial mess that needs to be fixed. How it affects taxpayers and schools depends on how reorganization plays out.

They call it a life line. As suburban Republican lawmakers and Rauner proposed bankruptcy as the answer to the CPS financial crisis, Democrats, parent groups and the Chicago Teachers Union were quick to blast the idea.

"Our system isn't bankrupt, our government leaders are," said Jennie Biggs of Raise Your Hand.

"Clearly they can't get their own house in order, yet they have plans to take over CPS, it doesn't make sense to us," said CTU President Karen Lewis.

Lewis says there is no need for a takeover while contract talks between CPS and the union are moving along.

"Rauner did not get elected emperor, he got elected governor. There is a problem that he's got of who he claims he representing, we need him to sit down," Lewis said.

Experts say bankruptcy is no easy fix. University of Chicago Law Professor Douglas Baird says compared to Chapter 11, which applies to corporations and individuals, there are many more hurdles to cross before filing for Chapter 9 - municipal bankruptcy.

"As long as they are able to access credit markets and meet current bills, they are not even eligible for Chapter 9," Baird said.

Which Baird says CPS is doing. In addition, he says revenue options must be exhausted before Chapter 9 eligibility. But, if bankruptcy became reality, Baird says taxpayers are still on the hook for coming up with revenue to pay creditors.

As for any changes in the classroom, Republicans claim there won't be any. Baird says that depends on who is in charge.

"The decisions about how to employ the teachers, which schools close, none of that is controlled by the bankruptcy judge, it's going to be controlled by whoever by law is empowered to run the system," he said.

Rauner says if bankruptcy is properly done, it could mean no teacher layoffs.

The CTU and some Democrats believe the governor is using the bankruptcy issue to bust the union and as a means to dismantle public schools in favor of charter schools. Republican lawmakers disagree.