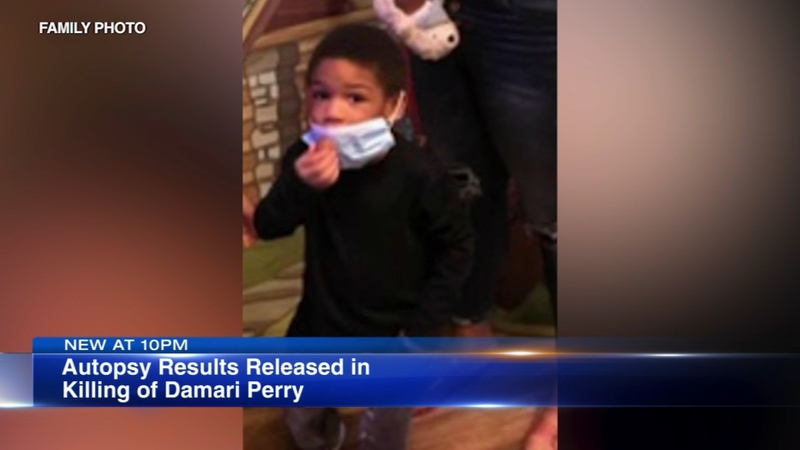 LAKE COUNTY, Ind. (WLS) -- The Lake County, Indiana coroner has released the cause of death for 6-year-old boy whose body was found in Gary last week after he was reported missing.

In autopsy results released Tuesday evening, the Lake County Coroner's Office said Damari Perry was found wrapped in a plastic trash bag and with indications someone tried to burn his body after he died.

Perry had an extremely cold core temperature and partially frozen internal organs. Based on that, the coroner's office said, his cause of death was found to be hypothermia.

RELATED: Mom charged with 6-year-old son Damari Perry's death had lost custody of her children in 2014

Perry's mother lost custody of the children after a domestic violence investigation in 2014 by the Illinois Department of Children and Family Services. Damari was placed into foster care shortly after he was born on Dec. 30, 2015, a standard procedure when someone is under investigation and other children have been removed from a home, according to department spokesman Bill McCaffrey said.

Jannie M. Perry regained custody of her children in 2017 after a court order.

In court Sunday, prosecutors said on Dec. 29, 2021, Damari's mother told relatives that the boy had to be punished for something he'd done. Prosecutors said the boy was placed in a cold shower for an extended period of time. He later vomited and became unresponsive, according to prosecutors.

Jannie and Jeremiah Perry, the child's older brother, then discussed how to dispose of the boy's body and took him to Indiana, prosecutors said Sunday.

On Wednesday, the family had called to report the boy could be missing in Skokie, but investigators said they quickly turned their focus to the boy's home in North Chicago after the family's story was contradicted by evidence.

Jannie M. Perry has been charged with first-degree murder, concealment of a homicide and obstruction of justice. She is due in court Monday.

Jeremiah Perry, the boy's 20-year-old brother, appeared in court Sunday and is being held on $3 million bond. He's also been denied any contact with family members. He's charged with aggravated battery, concealing a homicide and obstruction of justice in his brother's death.

A third family member, only identified as a juvenile sibling, is also facing charges, officials said.

The FBI joined a multi-department search for the boy last week, who they said went missing under "unusual circumstances."
"Why would a person hurt a child, my child at that," Perry's father Dalvin Driver said. "(It's) been like a nightmare that ended yesterday when they told me my son wasn't coming home."

More charges could be filed as the investigation continues, prosecutors added.