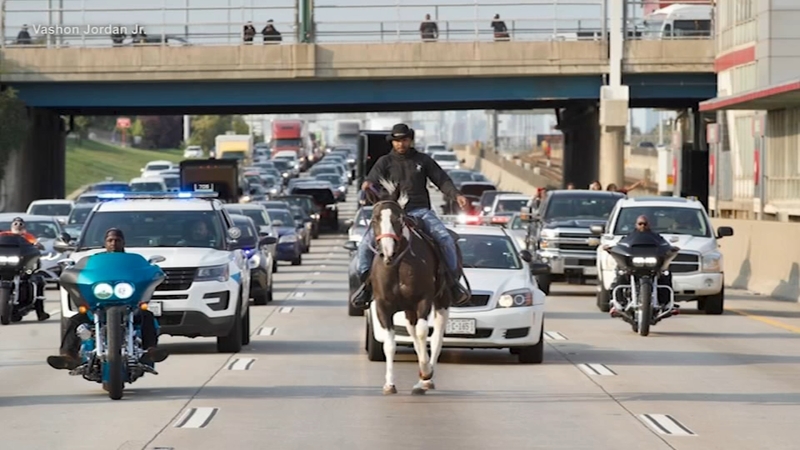 Illinois State Police said they received multiple calls about a man riding a horse on I-94 southbound starting at 47th Street just before 4:30 p.m.

The rider appeared to be Adams Hollingsworth, also known as the Dreadhead Cowboy, who posted live video of him riding on the expressway to his Facebook page.

In another post earlier on his Facebook page he wrote, "we focus on kids lives matter this gone keep happening' and told his followers he was going live at 4 p.m., saying, "y'all don't wanna miss this I promise."

Activists who met Hollingsworth at the end of his ride had a message to share, too.

"When it comes to everything we get the bottom of the barrel," another activist, who did not give her name, said. "It's not gonna happen no more. It's time for things to change. And we can keep saying it, but if we don't start moving and grooving it, nothing is gonna happen."

Chopper 7 HD was over the scene Monday afternoon. Hollingsworth galloped and trotted in the local lanes, and appeared to be escorted by a group of motorcyclists, for more than seven miles.

Traffic backed up behind him as he rode south, before he exited the highway around 95th Street just before 5 p.m.

At his peak speed the horse galloped at about 15 miles per hour, but was averaging around 10-12 mph.

Two Illinois State Police squad cars followed behind Hollingsworth. He was placed under arrest after exiting the highway and taken to the station on East 111th Street.

State police said Hollingsworth has been charged with reckless conduct, disobeying a police officer and criminal trespass to state-supported property.

A crowd gathered after he exited the highway and after his arrest, giving his horse water and pouring water on its neck to help it cool down. Police said Darron Luster, 55, attempted to take control of the horse, and refused to release the animal, so he was arrested for obstructing and resisting arrest, ISP said.

State police said the horse sustained several injuries, and was bleeding from the left hoof, injured on its right hoof and the right side of the horse's body had bleeding sores from the saddle.

The horse was taken away in a Chicago Mounted Patrol trailer to Animal Care and Control for treatment.