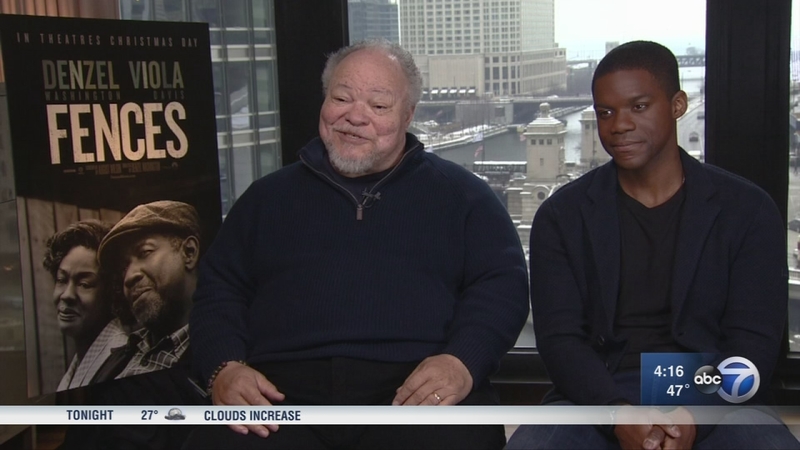 CHICAGO (WLS) -- Denzel Washington's troubled character in "Fences" has a best pal, played by Stephen McKinley-Henderson. They also performed the roles in a Broadway production of the August Wilson classic.

Henderson, who has a special connection to Chicago, was just in town with "Fences" co-star Jovan Adepo.

"First time I was here was junior high school. I won a contest - a paper boy contest. I grew up in Kansas City, Kan. The prize was getting a trip to Chicago in the middle of winter. It was great. I really, really... that's when I knew I had to go. I had to get out of Kansas City, because that was something," he said. "Chicago has always been a good omen on me. I was nominated for a Jeff Award back at the Wisdom Bridge in that theater building. Then I came back with the Goodman and did 'Jitney' with August (in 1999). It's always been a really great touchstone for me, Chicago!"
Related topics:
arts & entertainmentchicagoloopdenzel washingtonmovietheater
Copyright © 2022 WLS-TV. All Rights Reserved.
TOP STORIES
Man, 19, charged in Lincoln Park Chicago shooting, robbery
NY teen found dead in SC after 13 years; Sex offender charged
Student, 7, injured after gun goes off at Disney Magnet School: CPD
COVID reinfection likely to become more common, experts say
Woman goes viral wearing grandma's honeymoon wardrobe from 1952
Lightfoot defends Millennium Park youth curfew after 'Bean' shooting
IL Facebook users could see payment soon from $650M settlement
Show More
Walter Liss, longtime member of ABC family, dies at 78
Chicago Weather: Showers late
How Kristin Chenoweth is connected to the Girl Scout murders
You can now order 3rd round of free at-home COVID-19 tests
Illinois reports 5,327 new COVID cases, 14 deaths
More TOP STORIES News