The stars of the popular franchise reunited for Disney Channel's animated special, "Descendants: The Royal Wedding."
OTRC
By Andrea Lans 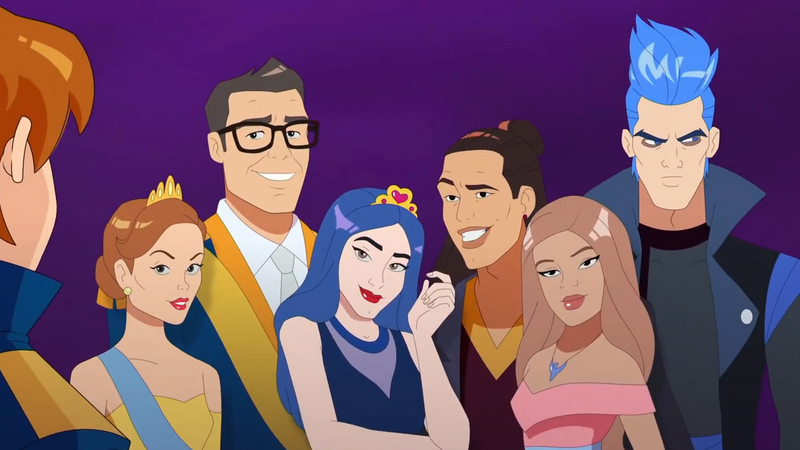 The Descendants are back, this time in animated form. Taking place after 2019 TV movie "Descendants 3," Disney Channel's "Descendants: The Royal Wedding" invites fans to Mal and King Ben's wedding, but Hades threatens to ruin the special night.

"It feels really nice to feel the talk of Descendants again and to get everyone excited. To know that what people are going to be watching is very special," Booboo Stewart (Jay) told On The Red Carpet.

Fans will also be treated to a brand-new song, which Cheyenne Jackson (Hades) describes as "catchy," "emotional," and one of his top three favorite songs in the entire franchise.

"I got to hear a couple of the other people's tracks they already laid down. I haven't sung a lot during COVID so I was a little crusty," Jackson laughed.

Sandy takes a look at "Spin," "The Descendants: Royal Wedding," and "The Magic Bake-Off"

Stewart thought they were done with the franchise after "Descendants 3," but he continued to talk with co-stars Sofia Carson (Evie) and Dove Cameron (Mal) about potentially bringing these characters to life again.

"We all kind of made the decision together and everyone was on board of just like, 'We should do this. This is only right,'" Stewart said.

2019 was marked with the tragic loss of Cameron Boyce, who played Carlos de Vil in all three films. The actor died suddenly following a seizure, a result of epilepsy, just one month before the third film debuted on Disney Channel.

"To include [the fans] in the family of the loss of Cameron I feel like is important because he represented so much for a lot of people," Stewart said. "We're family, but also the fans of Descendants are family too."