SQUAT FOR CHANGE: Photo of dad and baby on floor sparks call for diaper-changing stations in men's restrooms 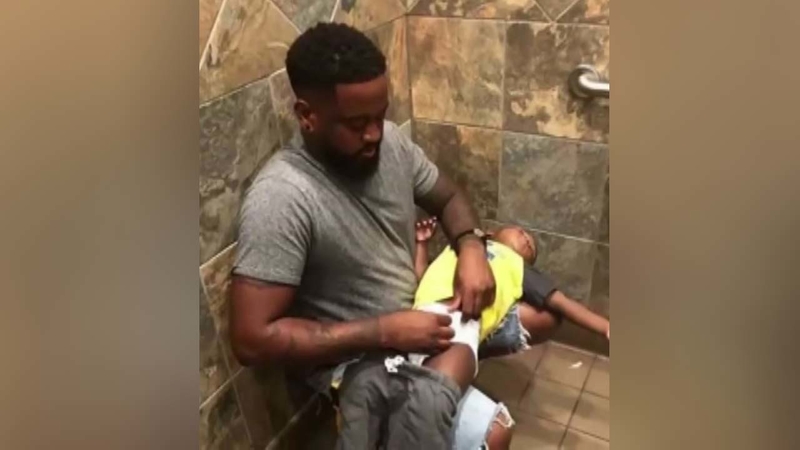 JACKSONVILLE, Fla. -- An Instagram photo showing a father squatting in a men's restroom to change his baby's diaper brought a serious conversation back to the forefront - the lack of changing tables available in men's restrooms.

Donte Palmer says one of his other children snapped the photo of him on the floor in the restroom of a restaurant in Jacksonville.

The photo went viral, with people from coast to coast, including celebrities, showing Palmer support.

"The support is phenomenal. I mean, dads are like -- it's like when dads come together, it's like a big teddy bear you get on Valentine's Day. It's like, all love, you know?" Palmer said.

He says the broader issue is about fathers being treated as equals to mothers and sharing the responsibilities when it comes to parenting.

"Fathers, we aren't highlighted like we should be. And I just want to bring that view and that light to us fathers, because we do matter and we do exist, and we are willing to do more than just provide and protect," Palmer told WJXT.

He and other fathers like him are starting a movement called Squat For Change. They're hoping it brings attention to what he says is a big need for changing tables in men's restrooms.

Palmer adds this is a worthwhile cause that deserves the spotlight it's getting again.

Back in June, a father of four in New Hampshire went on a rant about the issue and posted it on social media. In that case, Chris Mau was out with his 8-month-old daughter who needed a diaper change. When he went to the men's room, he discovered there was no changing table.

"I can't justify leaving my daughter in a messy diaper to try and locate a proper changing table, so I threw down the emergency towel, as I call it, which I always keep in the stroller," Mau said at the time.

Father rants after finding no changing table in men's room

Actor Ashton Kutcher has also been very vocal about the matter over the last few years. In 2015, he started a Change.org petition to rally for changing tables in men's bathrooms in retail stores.

Palmer says this movement isn't just for dads, though. He says he encourages moms to get involved and push for positive change, too.

"Regardless of race, regardless of size, or regardless of financial status, you know, we are fathers at the end of the day and we will do anything to protect and to nurture our babies," Palmer said.
Report a correction or typo
Related topics:
family & parentingfloridaparentingu.s. & worldviral
TOP STORIES
Security guard shoots man in buttocks at Millennium Park
Chicago mass shooting victim ID'd as father of 2, with twins on way
9 shot, 2 fatally, on Near North Side
Postal police say they are sidelined during time of heightened crime
New hotline aims to help those struggling with opioid, substance abuse
Officer relieved of powers after teen carjacking suspect shot: CPD
Chicago Weather: Occasional showers, thunder Saturday
Show More
United cancels couple's flight, charges $4K more for same seats
Teen charged with killing man after kicking him in head in CTA attack
Great Lakes Piping Plover chick Imani spotted in Minnesota
Doja Cat drops out of Lollapalooza due to throat trouble
Legendary Cubs pitcher 'Fergie' Jenkins immortalized with statue
More TOP STORIES News