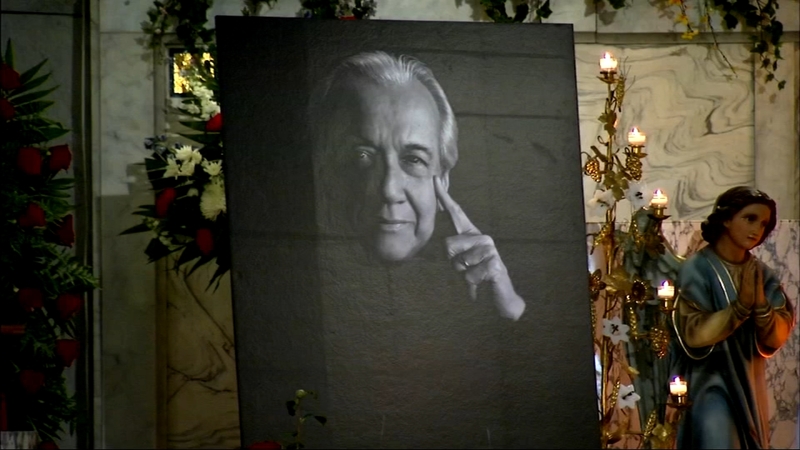 CHICAGO (WLS) -- There was a final goodbye Wednesday for the man known as the "voice of Chicago's Italian-American Community," Dominic DiFrisco. Family and friends, and those who admired him, packed the Shrine of Our Lady of Pompeii in the city's Little Italy neighborhood.

With Frank Sinatra music playing, hundreds of Chicago's movers and shakers gathered for the celebration of life.

"He was a powerbroker in a city of power," said close friend Richard Edelman. "He continued to advocate throughout his life for the dream of Italian Americans."

Born to Sicilian immigrants in 1933 in the Bronx, DiFrisco made Chicago his second home, where he was the voice of the Columbus Day Parade broadcast for more than 45 years.

"He loved that day more than any other because of what it represented," said DiFrisco's grandson Pasquale Dominic Gianni. "A celebration of his culture, and a tribute to all of those who followed in Columbus' bravery and footsteps, like his parents, by taking a giant leap to an unknown world in search of something new."
A fierce defender of Italian-American heritage, DiFrisco helped resurrect Little Italy's Shrine of Our Lady of Pompeii from the brink of disaster. He also saw the renaming of Congress Parkway to Ida B. Wells Drive while helping to preserve the Italian heritage of Balbo Drive.

The man was a legend, "and as you all know, legends never die," Gianni said.

It was a fitting farewell with Frank Sinatra music to start, and gospel music to finish.