Dominick Krankall suffered serious burns to his face and legs after being hit by a tennis ball soaked in gasoline and lit on fire.
WABC
By Eyewitness News 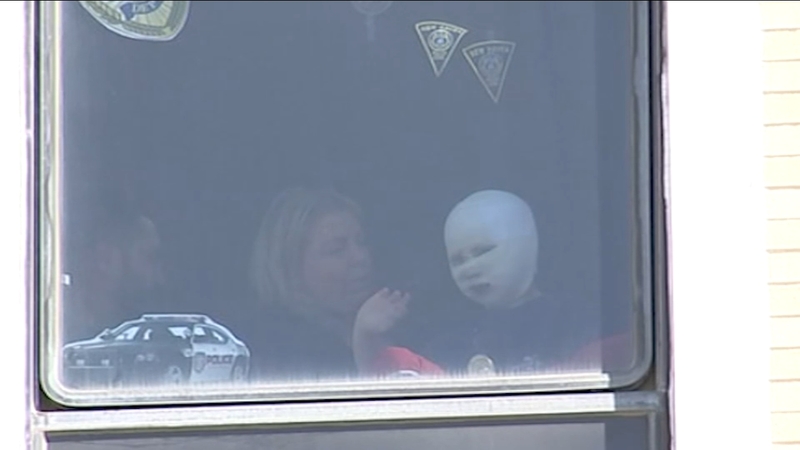 BRIDGEPORT, Conn. -- A town in Connecticut threw a parade Thursday to lift the spirits of a 6-year-old burn victim as he recovers in the hospital as the investigation into the incident continues.

Dominick Krankall suffered second- and third-degree burns while playing with two other children last Sunday, and he remains hospitalized.

He was with the 8- and 11-year-old sons of his family's landlord when they started playing with a gasoline can and a lighter.

Krankall was hit in the face with a tennis ball that was soaking in gas and lit on fire. He also suffered burns to his legs.

"It makes me want to cry tears of joy," one relative said. "This is amazing that everyone is pulling together for him like this. I never imagined this, and having a community like this is a good thing."

Krankall could be out of the hospital and back home in the coming days, though a war of words continues between his parents and the mother of the other two boys.

Krankall's parents, Aaron Krankall and Maria Rua, said their son has been the victim of bullying and also suffered a concussion last month after being pushed by one of the other children.

"My 6-year-old son looked at me, and he said, 'Daddy, he poured gasoline on a ball, and he threw it directly into my face, and he caught my face on fire with a fireball,'" Aaron Krankall said. "I will not stop, though, until this kid gets put away because this is not OK. I need justice for my son."

But the mother of those two children and the landlord, Laura Giacobbe, denied the family's claims.

"There was no bullying whatsoever involved, none," she said.

Giacobbe said Rua had agreed to keep an eye on the boys while she went out, and that the kids constantly played together.

But Rua said her son wasn't playing with fire and instead was the victim of bullying.

"My son has been bullied by this child for a year," she said. "That day, they purposefully threw a gasoline-saturated ball that they lit on fire at my son's face. They called his name so he would turn around. They threw it at Dominick and left him outside alone to die."

There is a security camera that overlooks that backyard, and part of the incident was captured on surveillance video that police are reviewing as their investigation continues.

"His face is about twice the size it normally is," Rua said. "He's swollen with blisters. You can't even see his beautiful eyes anymore."