Pair says Mexican restaurant threw them out for supporting Trump 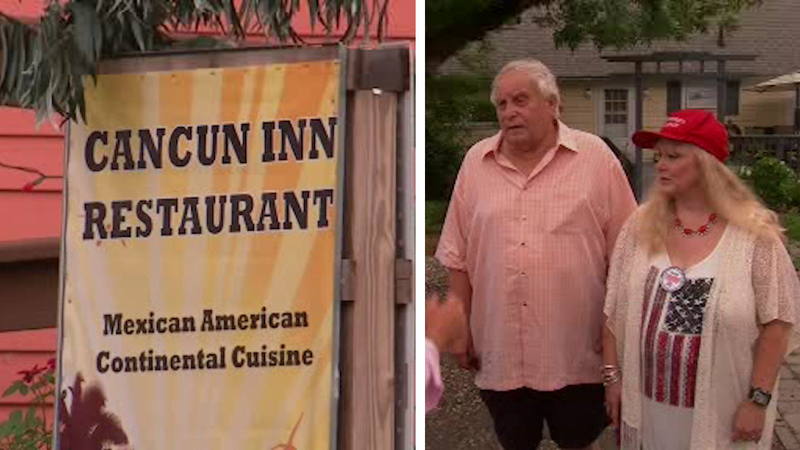 If somehow you didn't know what that red baseball cap with the words "Make America Great Again" refers to, Esther Levy's pin makes clear: She supports Donald Trump for president.

Mexican restaurant says patron was kicked out for being rude, she says it's because she supports @realDonaldTrump. pic.twitter.com/DGJgpSAghs

She says it's that endorsement that got her thrown out of a Mexican restaurant Sunday night.

"He started yelling at me, 'we don't serve Trump supporters, you have to go and never come back,'" Levy said.

Levy and her friend Alvin Goldstein went to the Cancun Inn in Sugar Loaf for dinner.

"I thought he was joking at first. I was in total shock," Levy said.

Shortly after being seated, they say a waitress told them they had to leave on the orders of the bartender who claimed to be an owner.

On the way out they exchanged words.

"I said to him, 'What are you going to do when Trump wins?' And he said, 'Hillary is going to win.' That was it," said Alvin Goldstein, a restaurant patron.
But Goldstein posted his version of events on Facebook where it exploded.

The restaurant owner's son responded, saying the two were rude to the staff and rowdy due to intoxication.

"I think it's discrimination. I think this is a free country and we should be able to wear whatever we want as long as it's appropriate dress," Goldstein said.

"In no way, shape or form do we discriminate against anybody," said Israel Campos, restaurant owner.

Campos is the principal owner; he was not there at the time.

Campos says people of all political beliefs and backgrounds are welcome at his restaurant. It is a designated safe space by an Orange County LGBT Pride group.

"We are a family restaurant. When you come into our small, little restaurant, you are family to us," Campos said.

His brother was behind the bar and claims on the way out Levy yelled that her family immigrated legally to the U.S. unlike the restaurant workers.

"That was very hurtful, very insensitive and it shows that they came in here looking for trouble," Campos said.

"For folks to be making wild allegations against him and his family inspired by this hateful rhetoric is a tragedy and a shame," said Michael Sussman, attorney.