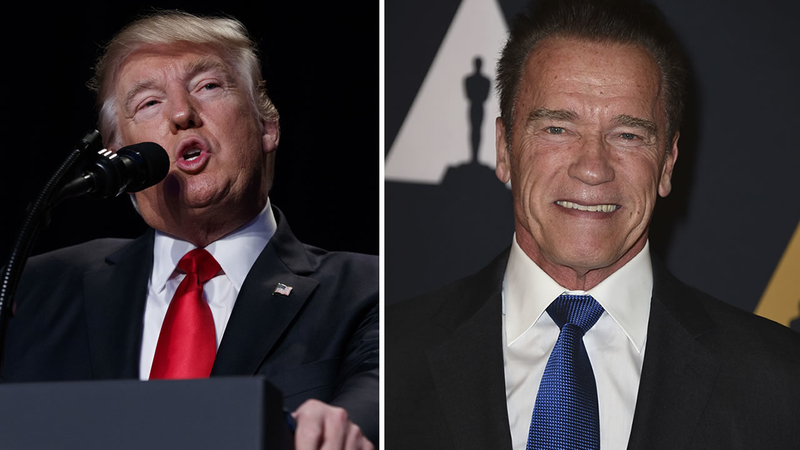 WASHINGTON -- The current host of "Celebrity Apprentice" and the former host of the show -- also known as former California governor Arnold Schwarzenegger and current President of the United States Donald Trump -- are feuding.

Pres. Trump jokes about Arnold Schwarzenegger as host of "Apprentice": "I want to just pray for Arnold if we can for those ratings." pic.twitter.com/hNy115htJr

On Thursday morning, Trump said during remarks at the National Prayer Breakfast that he wanted to "pray for Arnold" due to Schwarzenegger bringing in low ratings on "The Celebrity Apprentice."

Schwarzenegger suggested in a short clip posted to social media that the two swap roles.

"Hey Donald, I have a great idea. Why don't we switch jobs?" Schwarzenegger said. "You take over TV because you're such an expert on ratings and I take over your job and then people can finally sleep comfortably again."

A spokesman for Schwarzenegger, Daniel Ketchell, expanded on the former governor's remarks in a statement.

"Arnold is praying that President Trump can start improving his own approval ratings, which were the worst in history for an incoming President, by taking his job seriously and working inclusively," Ketchell said in an email to CNNMoney.

The Whole episode left a bad taste in the mouths of some Chicago religious leaders, especially many Muslims who have felt persecuted by Trump's executive order which limits their ability to travel to and from the U.S.

"Rather than focus on a reality television show, there is serious social and political strife in this country right now. We're seeing social upheaval, disunity, issues left and right," said Aymen Abdel Halim, Council of Islamic Organizations of Greater Chicago.

Mark Burnett, the television producer who with Trump created "The Apprentice," was around for the feud as well -- he introduced Trump at the breakfast.

Schwarzenegger was announced as Trump's replacement on the show in September 2015, after Trump decided to run for office.

Trump praised Schwarzenegger at the time, saying on Twitter, "Congrats to my friend @Schwarzenegger who is doing next season's Celebrity Apprentice. He'll be great & will raise lots of $ for charity."

"The ratings went right down the tubes," Trump said at the breakfast. "It has been a disaster."

Trump then said to the audience, "I want to just pray for Arnold ... for those ratings."

The comment appeared to be a joke, but it was not the first time that Trump has commented dismissively about the ratings for "Celebrity Apprentice" since Schwarzenegger's version of the show premiered last month.

The president called out Schwarzenegger when the new host brought in smaller viewership for the premiere of the new season than Trump had in his final season as host.

"Wow, the ratings are in and Arnold Schwarzenegger got "swamped" (or destroyed) by comparison to the ratings machine, DJT," the then-president-elect tweeted last month.

Schwarzenegger responded to these remarks by wishing Trump "the best of luck" and saying that he hopes Trump will "work for ALL of the American people as aggressively as you worked for your ratings."

During the US President's call with Australian Prime Minister Malcolm Turnbull on Saturday, Trump objected to an agreement over the US receiving refugees, sources told CNN. All this a day after a call with Mexico's President, where a transcript showed Trump complaining about Mexico's "handling" of "tough hombres."

Australia is an ally of the United States, with the two countries joining three other English-speaking countries in an intelligence sharing arrangement known as the "Five Eyes."

The disagreement came as the two leaders discussed a deal, reached under the Obama administration, for the US to accept refugees from Australia who are living on islands in detention centers off the mainland due to strict government policies.

Many of them are from the seven countries affected by Trump's travel ban. Trump on Friday also suspended the entry of all refugees for 120 days, along with indefinitely suspending the entry of Syrian refugees.

Sources say Trump insisted it was a very bad deal for the US to take 2,000 refugees and that one of them was going to be the next Boston bomber.

Turnbull told Trump several times the agreement was for 1,250 refugees, not 2,000. He also said Australia was asking to submit them to the US for refugee screening, and if the refugees did not pass the US screening process, they would not come.

Trump expressed concern as to how this agreement from President Barack Obama's administration would go forward given his executive order the day before temporarily suspending the US refugee program.

Trump abruptly ended the call because he was unhappy, a source told CNN. White House press Wednesday night, Trump tweeted, "Do you believe it? The Obama administration agreed to take thousands of illegal immigrants from Australia. Why? I will study this dumb deal!"

On Thursday, Trump used his remarks at the National Prayer Breakfast -- an annual tradition attended by many world and religious leaders -- to weigh in on the reports circulating on his phone calls.

The Washington Post was the first to report on the details of the Australian call.

When asked about the tweet labeling the agreement brokered with Obama's administration a "dumb deal," Turnball said, while the deal may not have been one Trump would've done or considered a "good deal," the President and his administration have committed to honor it.

Earlier this week, Spicer said the Trump administration would honor the agreement, saying the refugees would be submitted to "extreme vetting."

Turnbull attempted to keep some semblance of diplomacy, declining to elaborate on details of the call.

"Look, I'm not going to comment on a conversation between myself and the President of the United States other than what we have said publicly, and you can surely understand the reasons for that," he said. "I'm sure you can understand that. It's better these conversations are conducted candidly, frankly, privately. If you'll see reports of them, I'm not going to add to them."

One person familiar with the circumstances on Saturday notes that President Trump's phone call with Turnbull came after a long day of conversations with other foreign leaders -- Turnbull was the fifth call after conversations with Japanese Prime Minister Abe, French President Hollande, German Chancellor Merkel, and Russian President Putin, each of which lasted close to an hour.

Trump, this source said, was feeling some fatigue after his first major bout of diplomacy. And while his earlier conversations weren't necessarily contentious, they did involve some tense moments. Merkel and Hollande pushed back on the travel ban over the phone. Merkel felt she had to explain the Geneva Convention to Trump -- a lecture a source has said Trump chafed at.

A government official familiar with Trump's interactions with foreign leaders said, "(Trump's) interactions are naive in that he keeps suggesting we will have the best relationship ever with a broad departure of countries, but there is no substance to back it up. When he encounters a policy challenge, like with Turnbull, he responds with a tantrum."

The White House is expected to impose additional sanctions on Iranian entities under existing executive orders that predate President Donald Trump, according to sources familiar with the move.

The additional designations are in response to Iran's ballistic missile test Sunday and were first reported by Reuters.

Following a meeting Thursday with Harley-Davidson executives in the White House, Trump declined to rule out the prospect of military action against the Islamic Republic.

"Nothing's off the table," he said.

"As of today, we are officially putting Iran on notice," Flynn said from the White House briefing room.

The news of the Iran sanctions came the same day that the US Treasury Department said it will allow for some companies to do limited business with Russia's Federal Security Service, known as the FSB. The move is a minor easing of a sanction put in place at the end of the Obama administration that limits business to $5,000 for any calendar year.