Illinois lawmakers weigh in on US response after Iran missile strike 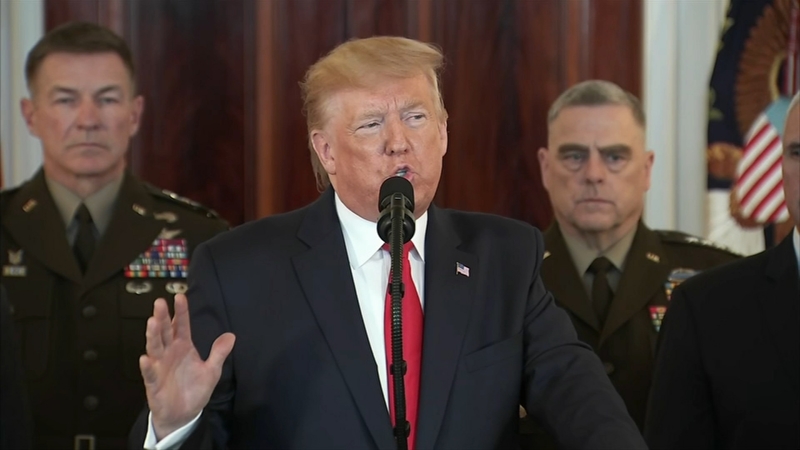 CHICAGO (WLS) -- Concerned Chicago residents from nearly a dozen organizations criticized President Donald Trump and his address to the nation regarding missile strikes fired by Iran at U.S. forces in Iraq.

The groups gathered at Trump Tower in downtown Chicago Wednesday.

"The speech Trump gave this morning was a speech of a top gangster in the world, threatening and bludgeoning other countries," said Lucha Bright, of Revolution Club Chicago.

RELATED: US, Iran step back from the brink; President Trump opts for sanctions

Janette Zainine, of group Refuse Facism, said, "I was expecting him to say we're going to war with Iran and I'm temporarily relieved."

"This is not a time for political bias and political posturing," he said. "This is a time of unity and showing our support to our heroes in uniform."

"Unfortunately, I don't think the briefing was that helpful," Krishnamoorthi said. "It did not shed additional light we already knew before, which was the claim that there was an imminent attack involving Soleimani plotting it."

Some said the president's speech Wednesday may signal a time to pause.

Retired U.S. Army Lt. Col. Jack Amberg said, "He was giving them the olive branch, saying, you know what, let's not go down the military path. Nobody really ultimately wins."

Saeid Golkar of the Chicago Council on Global Affairs said that "both sides want de-escalation."

"Both sides have two different approach," Golkar said." It seems Trump will increase sanctions and brace for possible revolution or uprising."

They have introduced legislation about the issue.

A war powers resolution requires the Senate to debate and take a vote on the legislation.

Durbin tweeted that, "The escalation of violence between Iran and the United States makes the constitutional responsibility of Congress to decide whether to declare war more important than ever."

The escalation of violence between Iran and the United States makes the constitutional responsibility of Congress to decide whether to declare war more important than ever. Stand up colleagues.

Republican Congressman Darin LaHood weighed in on Twitter, writing in part that he "condemns the missile attacks by Iran on American and coalition forces."

My prayers are with our brave men and women serving in Iraq tonight, and their families. I condemn the missile attacks by Iran on American and coalition forces stationed at Al-Asad and Erbil bases. I will continue to monitor the situation closely as more details emerge.

Democratic Senator Tammy Duckworth chimed in, saying President Donald Trump has been easily manipulated by hostile regimes throughout his presidency.

"So let me make something clear to Donald Trump. All is certainly not well when war is on the horizon just because you wanted to look like the toughest kid on the playground," Senator Duckworth said.

Republican Rep. Mike Bost said he's thankful that no Americans were killed in the missile strikes.

"President Trump sent a strong message to the world that the United States will stand against terrorism and a nuclear Iran," Bost said. "Hopefully, this will be an inflection point that spurs our friends and allies to join our efforts to promote peace and deter future terrorist attacks in the region."

I'm thankful that no American blood was shed during last night’s attacks. @POTUS sent a strong message that the US will stand against terrorism & a nuclear Iran. Hopefully, our friends & allies will join our efforts to promote peace & deter future terrorist attacks in the region.

The U.S. has sent thousands of additional soldiers to the region, putting the total number of U.S. troops, airmen and sailors in the Middle East at more than 80,000.

Iranian-born professor Dr. Mateo Farzaneh is a Middle East expert at Northeastern Illinois University. He said the best way for the United States to proceed is with a diplomatic solution to the conflict.