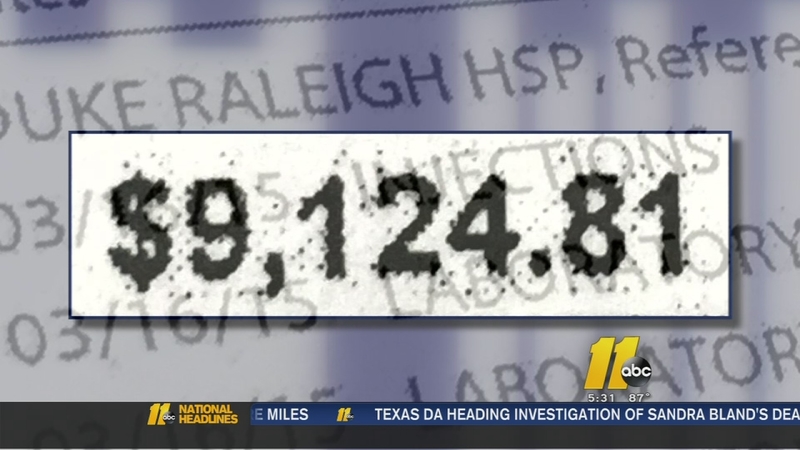 CARY, N.C. -- Medical bills are known to be costly, but an increase in one recent bill by thousands of dollars caught one Cary couple by surprise.

Donna Malloy, who is a breast cancer survivor, gets a shot of an essential vaccination twice a year. However, when she and her husband Mike opened their latest bill, they found the cost for that procedure shot up by thousands of dollars from year-to-year. The total price before insurance was considered went from $2,657 in 2014 to $9,124 in 2015.

The couple said they were willing to pay the necessary price for the vital medication, but they couldn't understand why the total bill was thousands more from year-to-year for the same medication at the same facility.

They called Duke Medicine who they say told them the price hike was due to a transition from Cancer Center North Carolina to Duke Hospital-based cancer clinics.

"They told me that that's just the price that it is and that would be what the bill would be," Donna said.

Angry that the price of the shot tripled without any notice to them, Mike and Donna reached out to me.

"The frustration on the process. The fact that we were in the same facility and really the complete lack of accountability was really what got us to get you involved," Mike said.

When I called Duke Medicine, a representative explained that the increase in price is related to a standard of care. When the Cancer Center of North Carolina transitioned into a Duke Hospital-based cancer clinic the treatment standards increased and that meant so did the prices.

Duke Medicine was willing to give the Malloys a one-time adjustment to their bill because of the misunderstanding and waive the $2,686 they owed out of pocket.

"While we want to save ourselves some money, the real message is hold the organizations accountable," Mike said.

To make sure you stay informed about your medical care, the best advice is to ask a lot of questions, especially if any part of your care changes, like your doctor, the practice name, or your insurance provider.