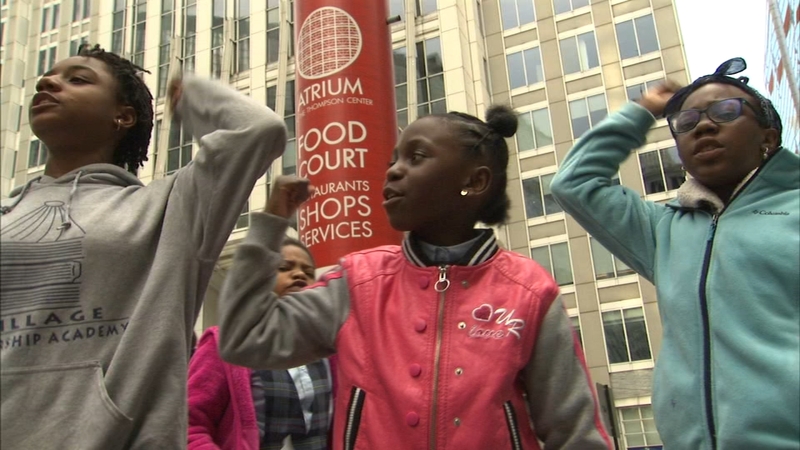 CHICAGO (WLS) -- The fifth-graders from the Village Leadership Academy are drumming up support to add an "S" to Douglas Park on Chicago's West Side.

They want to rename it for former slave and abolitionist Frederick Douglass - and not one-time democratic U.S. Senator Stephen A. Douglas. Some historians say Douglas married into a slave-holding family and inherited a large slave plantation in Mississippi through his wife, but denied any personal ownership of those slaves.

Student activist Gorgeous Dawson said, "I feel like that a park that has been named after a slaveholder and a former senator, that's not right."

The day of action for the 10- and 11-year- olds began Thursday morning in the classroom of their South Loop private school, which is known for encouraging social activism.

Teacher Bianca Jones said her last year's fifth-grade class actually came up with the renaming idea, one her current students embraced as they learn about human nature, the political process and history.

"It's made me more confident speaking to people about this," said Juan Martinez, 11.

"If you plant the seed now while they're also youthful, you compel them and propel them," Jones added.

The push to rename the 218-acre park - which encompasses both African American and Latino neighborhoods in the city's North Lawndale neighborhood - is gaining support.

"It is offensive. I feel like it should be changed to make the people and the kids living in the park and grow up around the park feel better," said VLA parent and North Lawndale resident Shanclanika Jackson.

The students canvassed the subway and the "L." Armed with clipboards, the kids also handed out leaflets about their online petition on change.org.