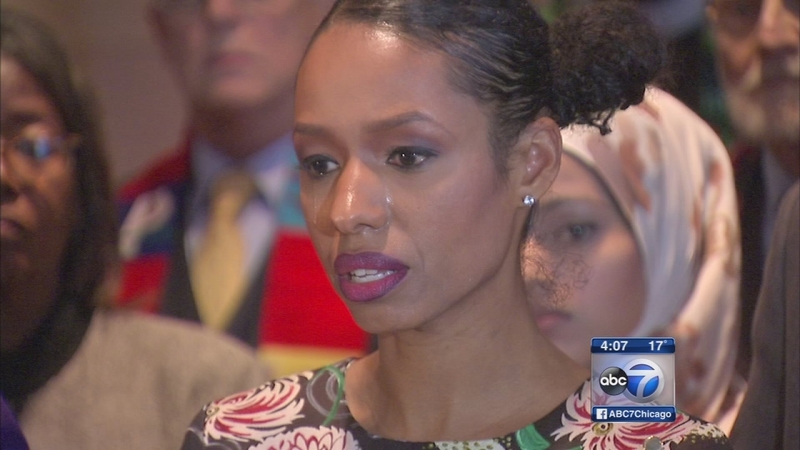 WHEATON, Ill. (WLS) -- There was a tearful goodbye from a suburban professor under fire for a Facebook post as Dr. Larycia Hawkins announced she and Wheaton College have agreed to mutually part ways.

The details are confidential, but Dr. Hawkins - the first African American female tenured professor in Wheaton College history - is leaving the school. College officials say her wearing a Muslim hajib had little to do with the decision, but her statements on social media about it were in conflict with the school's statement of faith.

It is the culmination of nearly two months of controversy for the Wheaton College political science professor and the school. Details of their mutual separation agreement are confidential, but her emotions and devotion to her students are on full display.

As school officials and Dr. Hawkins addressed the media downtown, students and others on the west suburban campus begin a demonstration of their own in support of Dr. Hawkins. They are beginning a 40-day fast coinciding with the start of Lent in front of the school's chapel.

Hawkins was initially suspended from the Christian school for posting a picture of herself wearing a hijab in solidarity with the Muslim community. The school however determined she was in conflict with Wheaton College's statement of faith, 12 points that all Wheaton College faculty must agree to.

"We are saddened by the brokenness that we have experienced in our relationship and for the suffering that this has caused on our campus and beyond. And yet, we are grateful to come to a place of resolution and reconciliation," said Dr. Phil Ryken, Wheaton College president.

Publicly the school and Dr. Hawkins say they are in agreement about terms of her departure. After making prepared statements, they took no questions, and they vow mutual support.

"I will always stand with Wheaton College, what it stands for, for my colleagues, for its shalom, for its peace, because that's what embodied solidarity means," Dr. Hawkins said.

As part of the separation agreement, Wheaton College will start a scholarship for a student to study peace and conflict. They also say they will invite a Muslim or Jewish scholar on campus every year to address students and faculty.