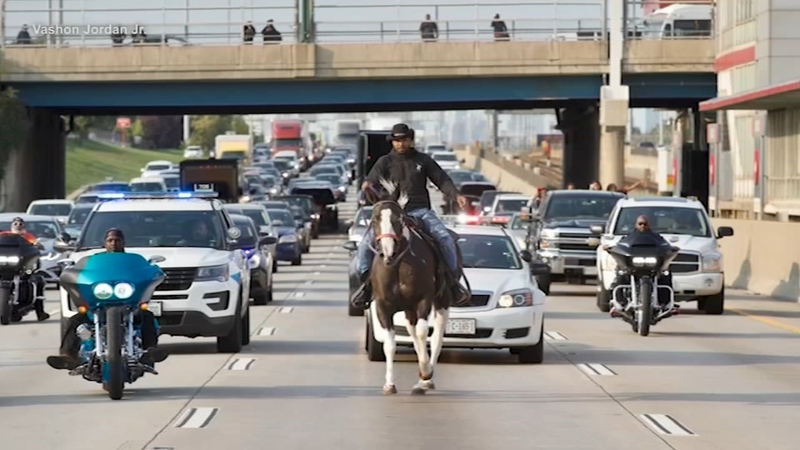 CHICAGO (WLS) -- Chicago's so-called Dreadhead Cowboy Adam Hollingsworth is in police custody after police said he rode his horse on the Dan Ryan Expressway during the evening rush.

Hollingsworth is facing several charges including reckless conduct, disobeying a police officer and trespassing on the expressway, obstruction of traffic by a person, pedestrian on a controlled access highway and operating a non-highway vehicle on a highway. The Cook County State's Attorney's office approved one additional felony count of aggravated animal cruelty Tuesday evening.

His sister said he remains in jail Tuesday, and the family is still waiting for details from authorities.

"He wasn't disturbing the peace. He wasn't hurting nobody," Lateshia Hollingsworth said. "It's very frustrating to even walk into a Chicago police station and they just have this nasty attitude and you're just trying to find information on your brother."

The calls starting coming in just before 4:30 p.m. Monday. Hollingsworth was going live on social media with a message.

In another post earlier on his Facebook page he wrote, "we focus on kids lives matter this gone keep happening' and told his followers he was going live at 4 p.m., saying, "y'all don't wanna miss this I promise."

"It's a lot of kids that's out here being hurt," Lateshia Hollingsworth said. "Like just yesterday, a 10-year-old got shot, and this is what he's fighting for, to stop the violence."

For more than seven miles, escorted by fellow activists on motorcycles, the Dreadhead Cowboy shutdown the Ryan.

Skymap7 clocked the horse at more than 15 miles per hour before Hollingsworth finally stopped around 95th Street just before 5 p.m.

Two Illinois State Police squad cars followed behind Hollingsworth. He was placed under arrest after exiting the highway and taken to the station on East 111th Street.

A crowd gathered after he exited the highway and after his arrest, giving his horse water and pouring water on its neck to help it cool down. Police said Darron Luster, 55, attempted to take control of the horse, and refused to release the animal, so he was arrested for obstructing and resisting arrest, ISP said.

Luster has been charged with obstructing and resisting arrest. He has been released on $1,000 bond.

"Let's be fair," Green said. "Let's be fair, really start to focus in the cause that he was bringing to light yesterday...It's not ok that a 10-year-old was shot on the West Side yesterday in the leg. It's not OK that we got babies and three year olds and two years olds being shot."

Fr. Pfleger responded to say that he supports the protest by Hollingsworth.

Mayor Lightfoot's office called what Hollingsworth did a stunt and a poor way to shed light on an issue.

Activists called her remarks ridiculous saying she used Hollingsworth as a stunt when she tapped him to visit neighborhoods for her census participation campaign as the "Census Cowboy."

State police said the horse sustained several injuries, and was bleeding from the left hoof, injured on its right hoof and the right side of the horse's body had bleeding sores from the saddle.

In photos shared with ABC7, the horse appeared injured and bleeding.