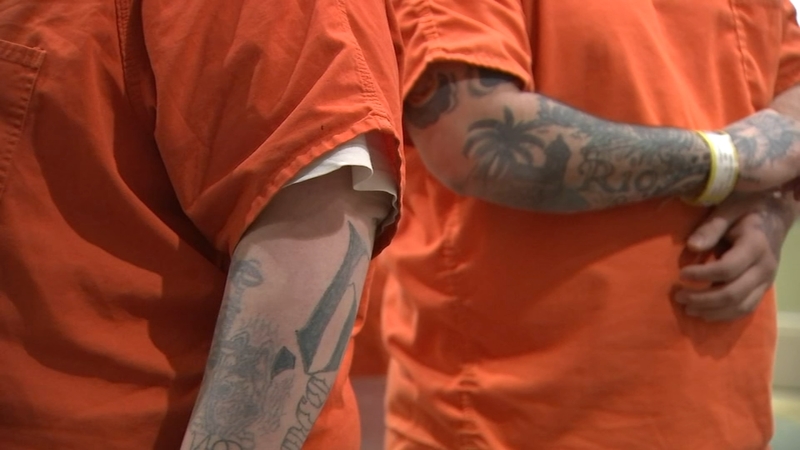 WHEATON, Ill. (WLS) -- After more than 20 years on the streets, Erik Eck earned the title of regional enforcer with his gang. And he has the tattoos to prove it.

All of the gang tattoos are now removed or covered up. It is part of Eck's commitment to saying goodbye to his old life.

"The fast life you know? Money, drugs, kicking doors down and beating people up. Getting paid to do it," he said.

After spending ten of the last 12 years in jail for various crimes, Eck is now taking part in an innovative rehabilitation program at the DuPage County Jail. Inmates are getting help with addiction, mental health, education and career training. And for many that means leaving the gang life-- including tattoos that have been a part of their identity since their early teens.

"It's a brand. You belong to this group of people," said Carlos Guzman.

But now, Guzman says no more. His tattoos are being removed.

Some of the inmates are from DuPage County, while others are from Chicago and Cook County. But the sheriff says it make no difference where they come from. He's more concerned with where they go next.

"When you take your tattoos off you can't go back. It's like taking your colors off. You can't go back to the gangland. You're not welcome there," said James Mendrick, DuPage County Sheriff.

Jaime Merinez's family offered to post bond so he could get out. He says he chose to stay in jail instead-- so he could take part in the program. He also is getting his gang tattoos removed.

"They could still bond me out. It's just, I feel way better this way. Covering my tattoos, not having a brand on me," Merinez said.

They say once they remove the gang tattoos there's no going back. And they say they feel the same way about this place. Once they leave there's no coming back.