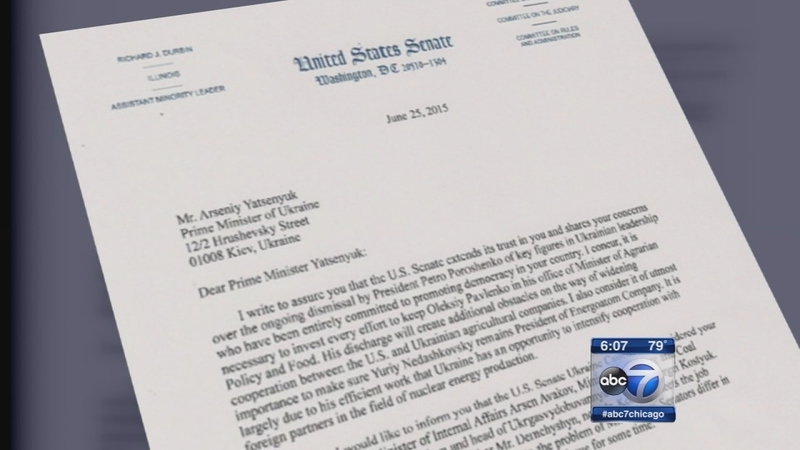 CHICAGO (WLS) -- Somebody is trying to pull one over on the Russians and the Ukrainians, and Illinois Sen. Dick Durbin has been put in the middle of it, the ABC7 I-Team is reporting. The diplomatic skirmish involves a letter claiming to be from Sen. Durbin to the Ukrainian prime minister.

Sen. Durbin turned over the forged letter to the FBI and CIA. At first glance, the letter to Ukraine's prime minister appears to have been written by Sen. Durbin, and in it he tells the leader how to run his government. But a closer read and careful examination of the letterhead make it an obvious forgery. On Monday morning Illinois' senior senator was enjoying an event with Metra workers.

By afternoon the existence of this letter had no one on his staff laughing. The letter, written on Senate stationery and appearing to carry Durbin's signature, was addressed to Ukrainian Prime Minister Arseny Yatsenyuk and suggests Yatsenyuk "invest every effort" to keep some cabinet members in place, but said the U.S. Senate feels that others are unqualified to serve. The source and motivation of the letter are unclear, even to Durbin and his staff, who learned of the hoax late Monday.

In a statement Monday night telling the I-Team that "Senator Durbin has been outspoken in his criticism of Russia's invasion of Ukraine and supportive of Ukrainian efforts to reform their economy and defend their nation." This letter is a forgery, Durbin's spokesman says, and "was obviously written by somebody with a tenuous grasp of the English language."

Their first clue: in the upper left hand corner is the use of the term "assistant minority leader", which is not a title they use nor is it on their stationery.

The sham letter was sent to Russian media in an apparent bid to make Durbin look like a bully, telling the Ukrainian leader how to run his government.

The I-Team has learned this isn't the first time an imposter has written a letter to the Ukrainian leader. Someone tried to bamboozle Yatsenyuk last fall with this letter from the head of the International Monetary Fund, a fake letter that castigated the leader's call for cash. It appears to be in the same font as Monday's Durbin letter, with similar odd punctuation and awkward grammar.

The source of that IMF letter was never determined, but with the Durbin disinformation in FBI and CIA hands, there is some hope to solve the mystery. Motivation may be as simple as what is at stake in Ukraine. Last month Democrats and Republicans in Congress backed legislation that would authorize $300 million for Ukrainian security assistance - something that has rankled the Russians.