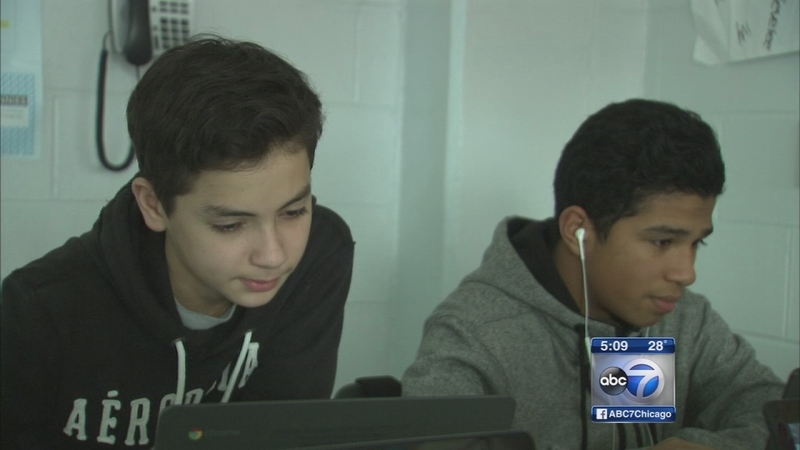 FRANKLIN PARK, Ill. (WLS) -- A new e-learning program could mean the end of snow days for some students.
The program being tested in three school districts brings a virtual classroom into students' homes on days when the weather prevents them from going to school.

While there haven't been any snow days for Chicago area students this year, that wasn't the case the past two winters, when school was canceled several times. Parents say it wasn't good for their kids.

Avoiding the books on snow days won't be an option this year for Leyden High School District 212. The western suburban school district is one of three in the Chicago area chosen for a new pilot program that allows students to take classes online at home during snow days.

"Whenever there is a snow day, it's like a total roadblock. It's like, you get to school and no one wants to go to school after, you're behind," said Jodi Dubrock, a student

"It's nice because it keeps the curriculum moving along as opposed to having a day off and then coming back a couple days later," said Sally Lakdawala, a teacher.

Lakdawala says it will be an easy transition for her students because are they used to online learning.

"We've had our Chromebooks since we came here as freshmen and we also keep them over the summer, so we're all pretty handy with them," said Azu Whighan, a student.

The e-learning snow days will work by notifying teachers, parents and students by 8 p.m. the night before. Teachers have until the next morning to e-mail lessons plans to students.

"By 9 a.m. the next day, our students open up their Chromebooks, they log-on, they will see an email from every teacher with the instructions on where their assignment is, where they can find resources and where they can click on attendance," said Asst. Supt. Mikkel Storaasli, Leyden H.S. District 212.

The district says students are given plenty of time to complete their assignments. For students without Wi-Fi, hot spots will be provided. Students like the idea of not having to make up days at the end of the year.