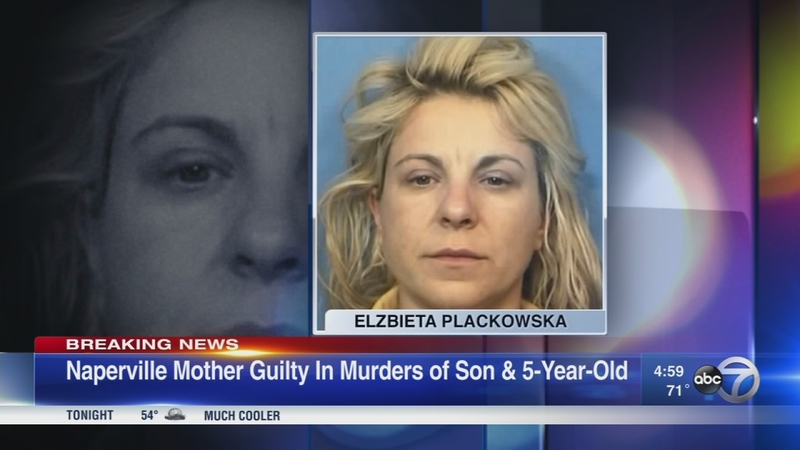 WHEATON, Ill. (WLS) -- A suburban Chicago woman was found guilty Monday of the 2012 fatal stabbing her 7-year-old son Justin and 5-year-old Olivia Dworakowski, who she was babysitting.

Elzbieta Plackowska, 45, formerly of Naperville, was found guilty in a bench trial that lasted about two weeks.

Plackowska was convicted on 12 counts, including 10 counts of first degree murder and two counts of aggravated cruelty to animals.

Naperville police officers responded to a report of a woman being robbed on Oct. 30, 2012, at about 11 p.m. When they arrived at the scene they found Plackowska covered in blood. At the same time, Olivia's mother Marta Dworakowski called police to help locate her daughter, who Plackowska was babysitting. When officers entered the Dworakowski home they found the two children and two family dogs dead.

According to prosecutors, at some point that night Plackowska told the children to get ready for bed but instead they began jumping on the bed in the master bedroom. Plackowska then took a kitchen knife and stabbed both children repeatedly before killing the family dogs.

Prosecutors said Plackowska then drove to a family friend's home. She was arrested and appeared in bond court on Nov. 1, 2012. She has remained in custody since.

Both the prosecution and the defense agreed this was among the most horrific crimes they have seen. Plackowska's defense maintained she was insane when she committed the murders, but the judge was not convinced.

"She loved them. There is no way she could do this to them if she knew what she was doing," argued defense attorney Kristen Nedval.

But DuPage County State's Attorney Bob Berlin used Plackowska's own statements to investigators following her arrest to argue against the insanity plea.

"There is no better evidence than the defendant's own words: 'I'm not supposed to, but I have to.' Those are the most important words she said. She knew what she was doing was wrong," he said.

Plackowska faces a sentence of life in prison. The judge agreed she may have been mentally ill and suffering from a psychotic episode at the time of the murders, but also said he believes she knew what she was doing was wrong.