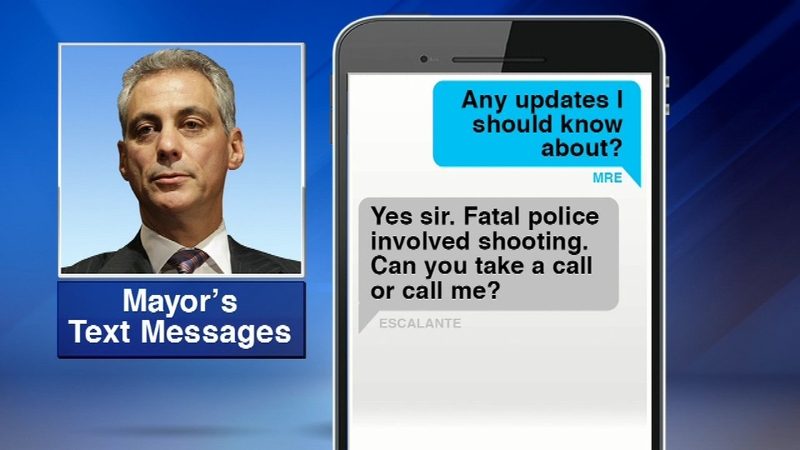 CHICAGO (WLS) -- Mayor Rahm Emanuel's text messages were made public Tuesday, offering a look at the mayor's reaction to a deadly police shooting in December.

It is the first time Mayor Emanuel has released his text messages. They cover a six-day period following the December 26, 2015, police shooting that killed a teenager and an unarmed mother.

Unlike the Laquan McDonald case - where on paper it appeared the mayor kept a distance - the texts show Emanuel very concerned about how the shooting plays in the media.

Four hours after a Chicago police officer shot and killed Quintonio LeGrier and Bettie Jones, Emanuel learned about the fatal shooting from Interim Supt. John Escalante. While vacationing in Cuba, the mayor communicated with Escalante through text messages released by City Hall.

At 8:20 a.m. on Dec. 26, the mayor writes, "Any updates I should know about?"
Escalante responds: "Yes sir. Fatal police involved shooting. Can you take a call or call me?"

Emanuel's next text to the top cop is redacted. In the following exchange, the mayor recommends for Escalante to reach out to ministers.

About an hour later, Emanuel texts his chief of staff Eileen Mitchell: "Please be in touch with John E about a fatal police shooting in 11, IPRA must be on the scene."
Mitchell responds: "Yes, am up to speed."
The mayor then texts, "Just tried you. Media acting breathlessly?"
Mitchell says: "Media on the scene."

She went on to give Emanuel a media recap. After more text exchanges, the mayor writes: "Just saw Tribune update. You are positive no public negative reaction?"

The next communication with Escalante is a few hours later when Emanuel learns about another police involved shooting. After being told it is not fatal, the mayor turns back to the LeGrier and Jones shooting.

The next day, the mayor texts his deputy chief of staff about reaching out to Bettie Jones' family. However, the next couple days' texts clearly show Emanuel concerned about how the shooting and new police policies are playing in the press.

In a Dec. 28 exchange with deputy communications director Adam Collins, the mayor writes: "Eileen said Kelly indicated that you all are getting a lot of calls about my trip? Also is that a sense we have a crisis"

On the same day, Emanuel trades texts with senior advisor David Spielfogel, who tells the mayor; "Press is all weather", referring to coverage of a winter storm.

The two exchanged more texts about new policy policies. Two were redacted by City Hall before the mayor texted: "Am I in those stories"?

Additional texts show the mayor concerned about interest from the national media, and in a response to a text about a Chicago Tribune editorial, the mayor responds with the word "snarky."

The text messages come from a city-issued cell phone. The mayor's spokesperson Adam Collins says city employees are only allowed to text message in limited circumstances. Because of online limitations in Cuba, Collins says texting was the best way for the mayor to communicate.

The Chicago Tribune is suing the mayor for refusing to release public business messages on personal accounts.