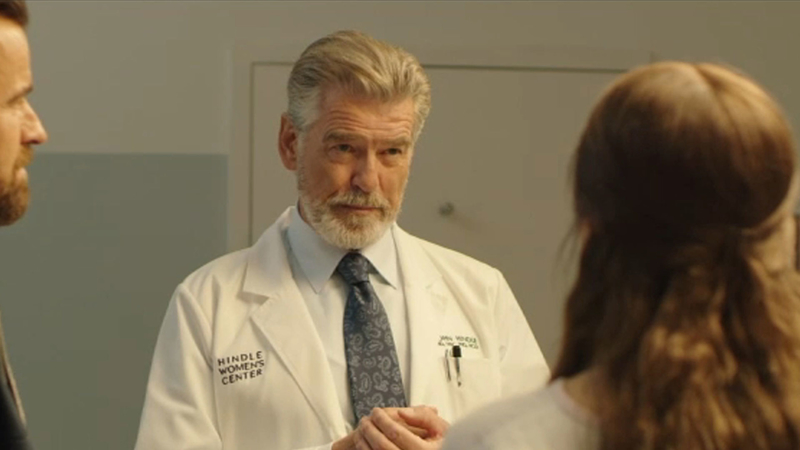 Pierce Brosnan played James Bond in four movies, which defined him as one of the most charismatic movie stars of his generation.

But the star has spent nearly two decades since redefining himself as a working actor who often defies expectations.

His latest movie, which starts streaming on Hulu Friday, has him playing against type as a creepy fertility doctor.

His search is on for LGBTQ+ talent with a special emphasis on Black, Indigenous, and People of Color performers so he can give them a chance to shine.

Dr. Hindle seems just as self confident and debonair as any character the actor has ever played, and his suave persona is used very effectively.

"You bring the audience in, and they see me and it's reassuring," Brosnan said. "He looks very charming and handsome and groomed and soft spoken and inviting."

He promises a couple played by Ilana Glazer and Justin Theroux that he will give them the best possible chance of getting pregnant, and she does conceive a child. But what begins with such promise soon turns into her worst nightmare.

As Glazer's character tells her friend, "I think Dr. Hindle did something."

Brosnan said it was fun being villainous.

And what better way to defy expectations than to appear in a horror film?

"I know this will probably turn off some of my female audience," he said. "But hopefully, they won't forsake me. Watch it or don't watch it, but you can't please everyone. You have to please yourself, ultimately."

Sandy Kenyon reports on the new opportunity for the two former "Bachelorette" contestants.

At this stage of his career, Brosnan can afford to take risks.

"That's the joy of it," he said. "And how you manage to prevail throughout and keep working as an actor, and try and be an unexpected surprise."