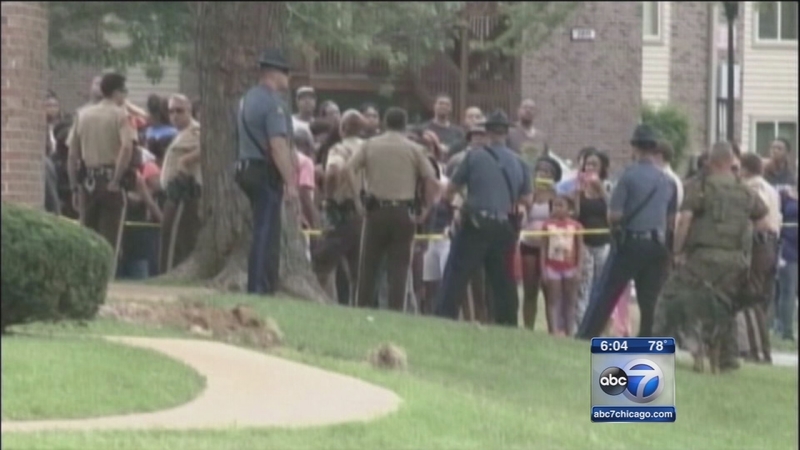 FERGUSON, Mo. (WLS) -- Four days after Michael Brown was shot multiple times by a suburban St. Louis policeman, the local prosecutor has just announced the start of a grand jury investigation, pledging total transparency once the determination is made whether criminal charges should be filed.

That process may not be fast enough for those who have taken to streets in protest of what they believe was the teenager's execution.

St. Louis County District Attorney Robert McCulloch said Wednesday that there are parallel investigations of what led up to the shooting death of 18-year-old Brown on Saturday night.

Brown was hit by numerous rounds from a single officer who had stopped the teenager and a friend walking down the street in a suburb North of St. Louis.

However, Ferguson Police Chief Tom Jackson says the officer who shot Brown was himself injured in the encounter.

"His face was swollen so he obviously was hit or something like that," Jackson said.

Witnesses dispute the claim that that Brown did anything wrong or did anything to provoke the officer into opening fire. Authorities are still pleading for witnesses to come forward - especially those with video or photos of the incident.

A small public group protested Tuesday night- some threw things at police and were sprayed with tear gas. But the fracas was far smaller than previous nights, when looters hit several stores and fires were set.

The population of Ferguson, Missouri is nearly 70 percent black. The police force is 97 percent white, including the police officer who shot Michael Brown.

On Wednesday, he is on paid administrative leave. Police said they will not reveal his name for his own safety.

Apparently, another officer was wrongly identified on social media as the shooter. The police chief says he and his family have had to leave town due to death threats.