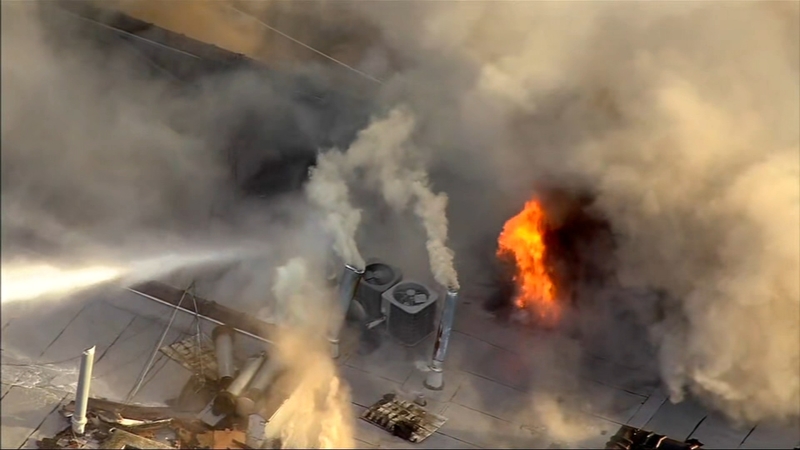 CHICAGO (WLS) -- An Uptown apartment building was heavily damaged by a fire Monday afternoon, according to the Chicago Fire Department.

Fire officials said the blaze started shortly after 3 p.m. in the 800-block of West Gunnison Street. It was struck out around 6:30 p.m., though crews remained at the scene to battle hot spots.

The damage to the building is such that fire officials said relocation of residents will be required.

Two residents told ABC7 they were home when the fire started. They said they heard fire alarms go off, smelled smoke, and evacuated the building with a few items, including their dogs.

"All of a sudden I smelled some smoke. An alarm went off. The firemen were at the front door, said 'Get out!'" said resident David Thomas.

Emergency crews are on the scene of a fire in an apartment building in Uptown on the City's Far North Side.

"I was getting ready to leave and I got a phone call, went and answered the phone, and when I got back the alarms were going," said resident Phil Stucky. "Had I left, my dogs probably would have died."

He grabbed his dogs and got out with just his wallet and a change of clothes. By the time firefighters got into position the fire was out of control; water was no match for the smoke and flames.

"Our companies had a hard time getting water on the fire due to the fact that it was in the rear of the structure, and we couldn't get right up on it," said Assistant Deputy Fire Commissioner of Operations Barry Garr.

Residents said someone was working on the building's plumbing in the basement, and they believe that's where the fire may have started.

Firefighters smashed top floor windows, temporarily feeding the fire to then try and contain it. Hours into the losing battle fire ate away at the roof

"That's when you heard the horns sound and everything indicating to the firemen, 'Drop what you're doing and get out. I don't like what I see,'" Garr said.

A CFD battalion chief was hit on the head by falling debris, said CFD spokesperson Larry Langford. He was wearing a helmet at the time, and was taken to Northwestern Memorial Hospital in stable condition.

No residents were injured.

Update on 2 11. One member transported to northwestern. Minor injury. Crews still working. Partial roof collapse. Fire cause will be accidental.