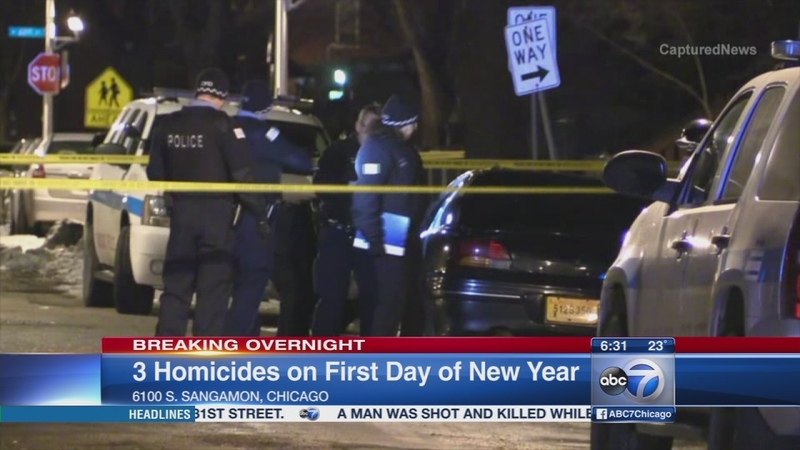 CHICAGO (WLS) -- Three men were killed and at least 21 others were wounded in Chicago shootings on New Year's weekend.

In the latest fatal shooting, a 33-year-old man was shot while sitting in a parked car around 10:30 p.m. Friday in the 6100-block of South Sangamon, police said. Officials say the man was a known gang member.

The 34-year-old woman was inside a residence at 12:05 a.m. Friday in the 8000-block of South Paxton when a bullet came through the second-floor window and grazed her hand, police said. She was taken to Advocate Trinity Hospital in good condition.

"We heard a popping sound, and I guess the sound went past my sister's ear," says Vianca Fisher, the victim's sister. "She raised her hand up, and the bullet went from the window through her finger."

The room was full of relatives, including young children watching New Year's Eve celebrations on TV, which is where the bullet lodged.

"If the kids were standing in front of the TV, who knows what would have happened," Fisher says.

The bullet was apparently fired by a reveler who was celebrating the new year by shooting into the air. Neighbors were left shaking their heads.

"It's a New Year's custom that should be done away with," says Cindy Kirksey.

A little over two hours later, Chicago had its first homicide of the year. Police say the victim is 24-year-old Deandre Holiday, a gang member who had been arguing with another man inside a bar when it spilled out into the street. The other man pulled a gun and shot him in the chest, then fled, police said.

Anti-violence protesters say they will continue demonstrations in the city's Loop and Gold Coast neighborhoods to spread their message into the new year.

"We're here because while we're remembering all the great events of the year - NFL drafts, Lollapalooza, light shows, baseball games and air shows, we also want to remember that there's blood in the streets of Chicago. It's not just about drafts and parades, it's about people being shot and killed in Chicago," said Father Michael Pfleger, St. Sabina Church.

Just before the city rang in 2016, Interim Chicago Police Superintendent John Escalante spoke to the media to talk about the violent year.

"But we're not unique. Chicago is not unique. Certainly I'm not trying to take the spotlight off Chicago. But if you look at every other major city across country, everyone has dealt with a spike and increase in violent crime," Escalante said.

Hours before the city's first reported murder, the Chicago Police Department released new crime numbers for 2015. The statistics show there were more than 50 more homicides last year than in 2014.

The new numbers come at a bad time for the department, after the release of dash-cam video that shows the fatal shooting of Laquan McDonald, 17, by Chicago Police Officer Jason Van Dyke. The department is also trying a more even-handed approach, implementing more training in de-escalating situations and using non-lethal force.

Even though murder numbers are up, Escalante said crime rates are down in other areas, like sexual assault and robbery. He credits the men and women of the department with the decrease in those areas, but said there is lot of work to be done.

"We have a lot to do in some communities in the city of Chicago to build trust," Escalante said.