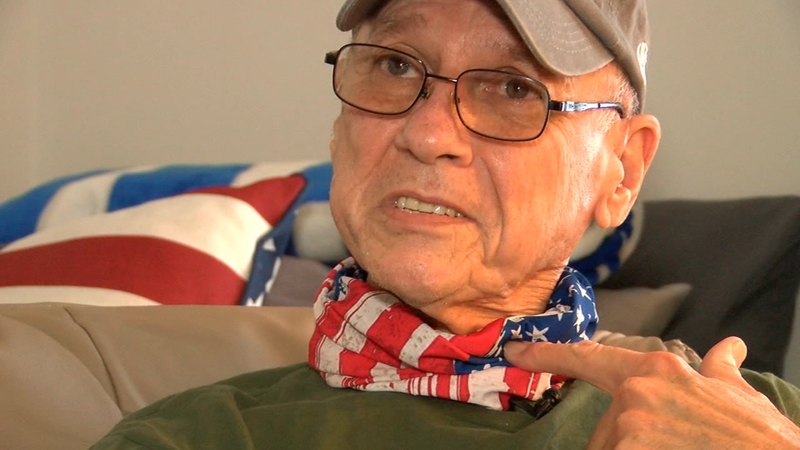 HAVELOCK, N.C. -- An Air Force veteran said he quit his job in Havelock, North Carolina, when he was told he could not wear an American flag face covering.

Havelock is a military town. It's the home of Marine Corps Air Station Cherry Point, the world's largest Marine Corps air station, and it's located about 40 miles from Camp Lejeune.

So Gary Dean, 69, was shocked by what he saw as an anti-American policy at the Food Lion where he worked.

"Apparently corporate came down and said 'Somebody was offended by the image of the American flag on the face covering,'" Dean said.

Dean had been wearing the patriotic face covering for months without issue. He said when he was told to take it off, he couldn't just quietly abide by the new rule.

"As a veteran, my dad being a World War II hero, my best friend killed in Vietnam, out of respect for them I can't just say no, I'll take my flag and put it in my pocket," Dean explained. "I had to quit, out of principle."

The ABC affiliate in eastern North Carolina reached out to Food Lion about the policy. The company said that while it respects the American flag, its policy "prohibits associates from wearing clothing with writing, insignia, or symbols."

Dean said he's not angry with the store's managers, but he does think the corporate policy is being enforced in a way that disrespects the U.S. flag.

"I love this country," he said. "I love that my dad went off and fought for my country, nearly got killed for this country but came back and raised a family. I love everything about that flag. So, yeah, that is my priority."

He added that his face covering is a print of the U.S. flag, not an actual American flag, which he could see as being considered disrespectful.

Food Lion's full statement about the policy is below:

"At Food Lion, we have great respect for the American flag. Like many other organizations, we also have policies that guide the attire and conduct of associates in the workplace. As part of our effort to prevent the spread of COVID-19 and to protect the well-being of our associates and customers, we've required associates to either wear reusable face masks provided by Food Lion or choose to wear a different face covering while working. However, all face coverings must adhere to standards set by the company and communicated to each of our more than 77,000 associates. The policy prohibits associates from wearing clothing with writing, insignia or symbols. The dress code is meant to ensure a consistent and professional representation of our associates inside of our stores."
Report a correction or typo
Related topics:
politicsnccoronavirusamerican flagflagsgrocery store
Copyright © 2022 WLS-TV. All Rights Reserved.
TOP STORIES
More Chicago neighborhoods, businesses want private security
Uvalde school shooting: What we know about 19 kids, 2 teachers killed
Abbott slams Chicago gun laws: 'Not a real solution'
Chicago's 'Walking Man' lit on fire while sleeping on street: source
LIVE RADAR: Storms prompt tornado warnings; funnel cloud spotted
Girl, 8, found dead in Uptown home, police say
Chicago early voting delayed again due to ballot changes
Show More
Chicago Weather: Periods of rain, storms Thursday
IDPH reports 9 possible cases of hepatitis in kids
Timeline breaks down Uvalde shooter's movements day of massacre
Teen athlete starts lip gloss business 'for all skin types'
Luis Arroyo sentenced for bribery scheme
More TOP STORIES News