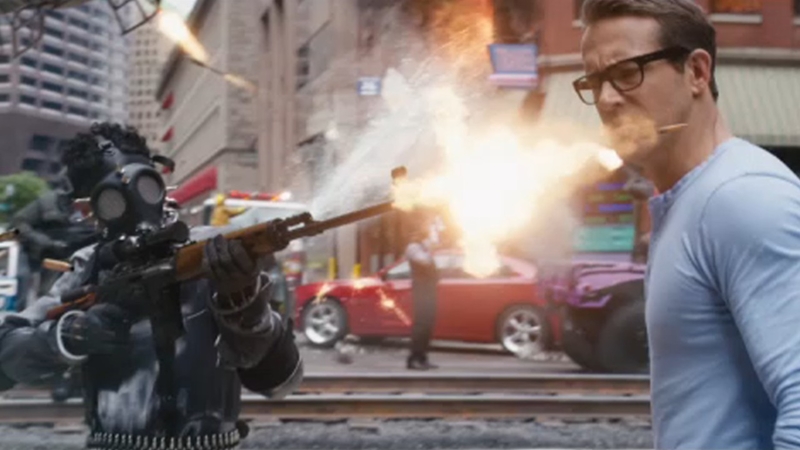 NEW YORK -- A new movie out Friday only in theaters features Ryan Reynolds as a background character, known as a non-player character (NPC).

He becomes a "Free Guy" with a mind of his own. The action takes place inside and outside a game that was invented just for this movie.

I really enjoyed this one, which surprised me because so many other movies that have been inspired by video games are so lame.

The original "Tron" from 1982 was a fine, first step. "WarGames," released the following year, was compelling, but a long, long stretch of bad movies followed. All of which makes "Free Guy" all the more welcome.

So few movies about gaming have any heart or soul, and yet, this movie has both.

"You'll be surprised of how grounded it is," said the performer known as Lil Real, who plays a bank guard and friend to Ryan Reynolds' character within a video game. "You look at the trailer, you think it's just gonna be a bunch of this 'n that. No, it's got some heart, and it's got some romance in it. It's a comedy. It's action."

Ryan Reynolds talks about incorporating Deadpool into the MCU for a promo for "Free Guy," breaking the internet in doing so.

Jody Comer plays a dual role as a character in the game called Molotov and the gamer in the real world named Millie who controls Molotov.

"It's quite rare now that you get a film that is kind of a brand new story," Comer said. "You know this isn't based on any particular video game: this world is created, and it's brand new so I think that allowed the team a lot of freedom."

The folks who made "Free Guy" aren't gamers themselves, but those of you who do play will find much to enjoy: nods and winks that only they will understand.

The rest of us are none the wiser but still able to enjoy the action. As Joe Keery explained, "it is set in this video game world, and in the real world, but that's really just the shell for the story."

A bright, young star like Keery from TV's "Stranger Things" is the perfect complement to an American everyman like Ryan Reynolds.

"Free Guy" stars Ryan Reynolds as a video game character who figures out he can control his own destiny.

At the Manhattan premiere the star said this movie, "speaks to people coming together, stepping out of the shadows, unifying, and creating, becoming agents of change. I think it's about taking back control of you life."
The movie's release comes two years after the film was finished, delayed by a lockdown that might have given the film's message more impact.

Reynolds feels that, "this movie gets more and more relevant the longer we go into this odyssey."

"Free Guy" is distributed by Disney, owned by the same parent company as this station.

Ryan Reynolds joins Sandy Kenyon for this edition of "The Sitdown" to disucss his movie "Free Guy."