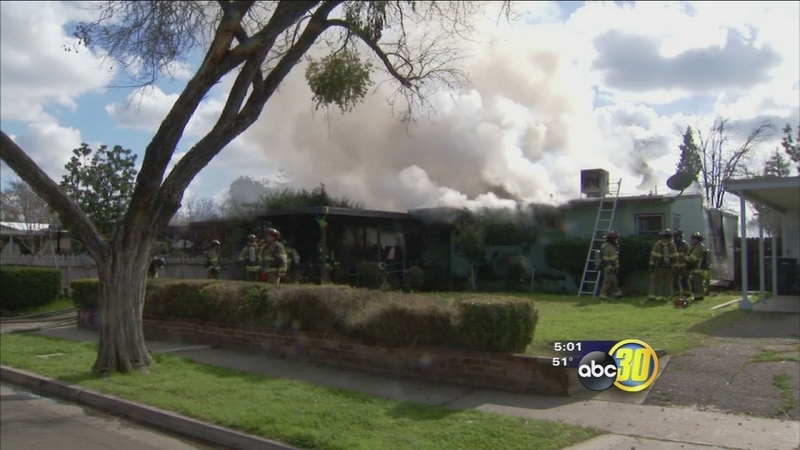 Man allegedly attacks family with crowbar and then sets house on fire, according to Fresno police

FRESNO, Calif. -- Fresno police say an arson suspect was a mad man on a mission, and the say he beat his family with a crowbar before setting the house on fire.

It happened just before noon near Dakota and West Avenues in central Fresno. Officers say Richard Garcia was acting bizarre moments before flames destroyed the home.

Detectives say Garcia asked his brother-in-law for a cigarette. He gave him one, but Garcia didn't like it and the problem sparked a huge disturbance and fire.

Fresno police say Garcia was on the porch with a knife when officers pulled up to heavy smoke and flames, and say he went on a rampage after bumming a cigarette he didn't like.

"He asked his brother-in-law for a cigarette. He was mad. He thought it was not a good cigarette," Lt. Joe Gomez with the Fresno Police Department explained. "He got angry, he then grabbed a crowbar, attacked both of them and he got a hammer, attacked them with a hammer. He chased them with a knife."

Officers say sister and brother-in-law managed to get away and run to a neighbors. But then they noticed their house was billowing with smoke. Fire investigators say the blaze was suspicious from the start.

Downed power lines made fighting the fire even more of a challenge. Frantic family members showed up and didn't know if others made it out also made the situation tense.

The suspect refused to give officers any information about what prompted his violent behavior or how he started the fire. Garcia did have cuts, burns and singed hair that was treated at the scene.

"He is not saying much of anything to us," Gomez said.

Garcia is facing charges of assault with a deadly weapon and arson. His sister and brother-in-law were also treated for minor injuries they got while they were hit with the crowbar and hammer.
Related topics:
californiahouse firefresnou.s. & worldsuspicious firearson investigation
Copyright © 2021 KFSN-TV. All Rights Reserved.
TOP STORIES
FOP pres. posts video after ordered not to talk about vaccine mandate
Chicago Sky take 2-1 lead over Phoenix Mercury in WNBA Finals
Shooting death of 15-year-old in Brainerd ruled a homicide
COVID tops cause of death for police for past 2 years
Mom delivers 14 lb. baby after suffering 19 miscarriages
Man, 55, shot in Wicker Park amid robbery attempt near 6 corners
IN kids mistakenly get COVID vaccine instead of flu shot: parents
Show More
Chicago's 'must stop' Mexican restaurant is more than tacos
New Chicago postmaster defends changes to mail delivery
Lincoln Park building catches fire near CTA tracks
Police search for double homicide suspects in Tinley Park
Naperville North HS cancels class after threat for 2nd time in a month
More TOP STORIES News