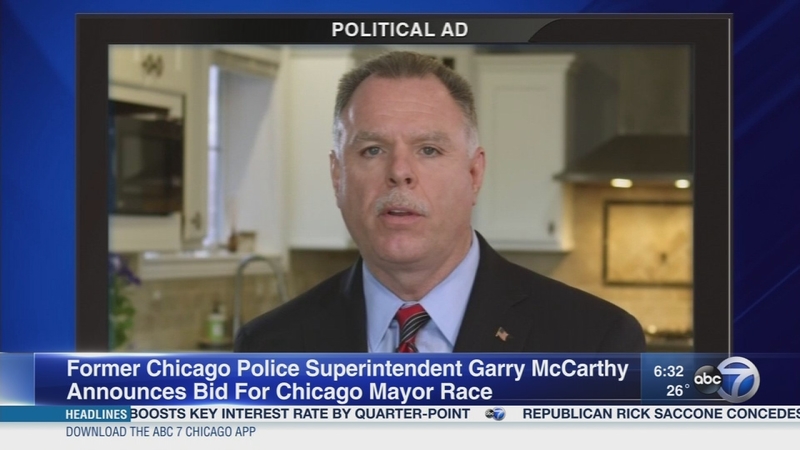 In a video posted on his campaign website, McCarthy said Chicago is on the wrong path.

"We can't lift this city up if our citizens don't trust their mayor to do what's right. The mayor has promised results for years, but he's failed over and over again," he said in the video.

The son of a World War II veteran and cop and a night shift nurse, McCarthy highlighted his working class roots.

"So when I became a police officer in 1981, I wore my dad's shield number 14573, and I made a promise to serve with honor and integrity," he said in the video.

McCarthy has been raising his public profile for months, appearing last weekend at the St. Patrick's Day Parade and holding a recent fundraiser.

"I think it will be a tough to say that he had nothing to do with the Laquan McDonald scandal or that it wasn't his fault. He was the top cop," said ABC7 political analyst Laura Washington.

ABC7 Eyewitness News left messages for Mayor Emanuel's campaign spokesperson but did not hear back. The election is in February 2019.

Mayor Rahm Emanuel appointed McCarthy to replace Jody Weis as police superintendent shortly after his election in 2011. He resigned at Emanuel's request on Dec. 1, 2015, after massive protests following the city's release of dash-cam footage showing the fatal police shooting of 17-year-old Laquan McDonald in 2014.

McCarthy came under fire following the release of the video. McDonald was shot 16 times by Chicago Police Officer Jason Van Dyke in October 2014. Van Dyke was charged with first-degree murder.

In 2012, just over a year after coming to Chicago, McCarthy faced one of his first big challenges as Chicago's top cop: the NATO Summit. He was praised for a job well done, managing thousands of protesters during the two-day conference of world leaders.

"It is no secret that Chicago is on the wrong path. This administration has brought us our failed education system, the overwhelming tax burden on hard-working people, and the violent crime that plagues the entire city. Over the past year, thousands of Chicagoans have approached and encouraged me to run for mayor to fix these problems. Under the current administration, we've heard nothing but broken promises from City Hall. When our Mayor focuses on politics, and not problem solving, none of us can move forward. It's time for new leadership that will fix our problems and pull us together. After thoughtful consideration and at the urging of my supporters, community leaders, and my family, I am officially announcing that I am running for Mayor of Chicago.