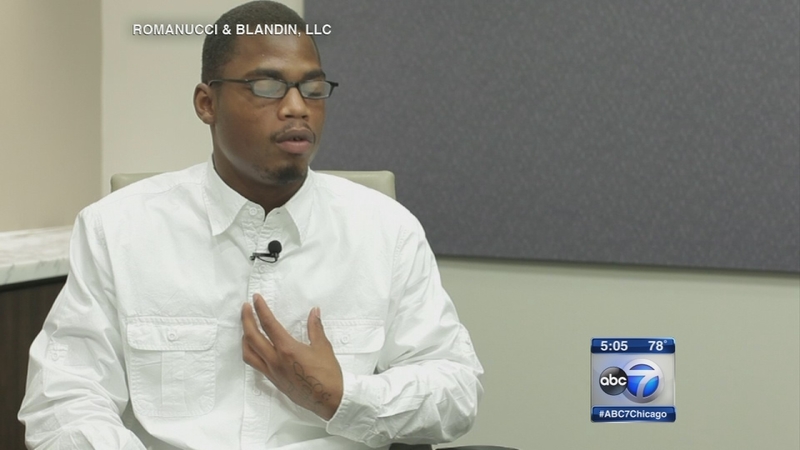 CHICAGO (WLS) -- Chicago Police Commander Glenn Evans is now being sued. He is charged with battery and official misconduct. Prosecutors say he put a gun in the mouth of a suspect.

Chicago Police Supt. Garry McCarthy has frequently praised Cmdr. Evans for his aggressive style of law enforcement. But the civil suit filed by his alleged victim accuses the officer of placing a stun gun near his groin and his service revolver in his mouth. The suit also alleges the commander threatened to kill Ricky Williams.

Williams says a Chicago police commander threatened him with a gun more than a year and a half ago inside an apartment complex. He had nothing to say to Eyewitness News, but earlier Tuesday at his attorney's office, he recorded several comments and distributed them to the media.

"They took the gun, put it to my throat, put it down my throat," said Ricky Williams, alleged victim.

Williams filed suit Tuesday morning against the city and Cmdr. Evans, the officer who he says put the gun down his throat. Evans is already facing felony criminal charges after Williams DNA was found on the commander's gun. Among other claims, he alleges the officer used excessive force and accuses the city of malicious prosecution.

"This unprovoked act committed under the guise of effect an arrest was done at nearly the highest level of command in the Chicago Police Department," said Antonio Romanucci, attorney.

Chicago Police Supt. Garry McCarthy participated in a police awards ceremony Tuesday morning, honoring officers' accomplishments. He did not make himself available to comment on the lawsuit. In the past, however, he has said if the allegations against Cmdr. Evans are true, they are reprehensible.

Williams alleges the officer threatened him inside an apartment building. Neighbors say at the time, the building was vacant. Williams and his family say they want justice.

"What happened to my son should never happen to any human being. This is something that the Chicago Police Department, or any police department across America, should ever get away with," said Jamie Eskridge, alleged victim's mother.

"The things that they did they should get punished for," said Williams.
After the alleged incident, Williams was arrested on a misdemeanor charge of reckless conduct. Police admitted they found Williams had no weapons. The charge was dropped a few months later.
Williams' suit asks for at least $100,000 in damages.