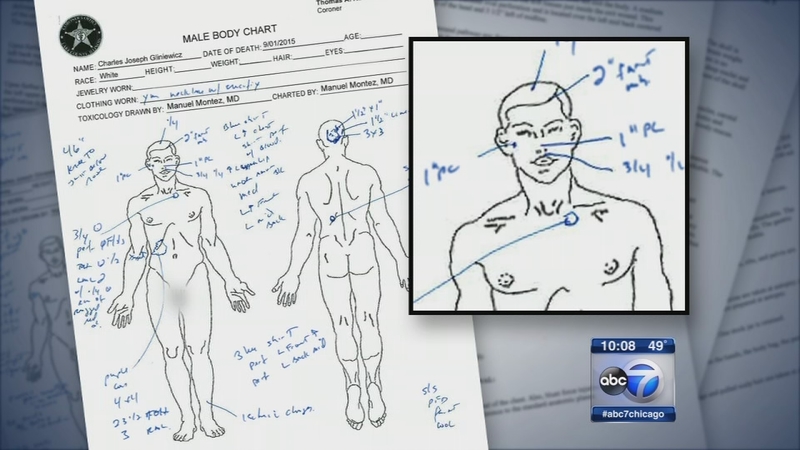 For the first time, we're learning that early on, investigators wanted to learn from toxicology testing whether Gliniewicz was using steroids.

The report confirms what we already knew: that Lt. Joe Gliniewicz ended his life with a self-inflicted gunshot wound above the vest.

But there are new details in these documents obtained by the I-Team. A toxicology report shows Gliniewicz had no alcohol, illegal or prescription drugs in his system - just caffeine and cigarettes.

A test for steroids also came back negative. Investigators say they specifically requested the test after learning of rumored steroid use.

Financial records show Gliniewicz spent much of the money he allegedly embezzled on gym memberships and hormonal supplements.

The coroner also found multiple contusions on Gliniewicz's face and back of the head, perhaps sustained after he shot himself.

"He probably staged where he wanted to go down, and his nose is bruised. So there are blunt force injuries or external injuries to the head," Lake County Coroner Dr. Thomas Rudd said.

Investigators say they looked into the possibility that some of those bruises were self-inflicted, perhaps to fake a fight. Detectives were ultimately unable to prove it.

In the end, the report shows that Gliniewicz did not allow himself a last meal on his final morning - and despite his alleged infidelity and criminal deeds - he wore a crucifix around his neck and his wedding ring.

Coroner Thomas Rudd was not available for comment Wednesday. He's been the public face of the coroner's office, but the autopsy itself - according to the report - was done by his staff.