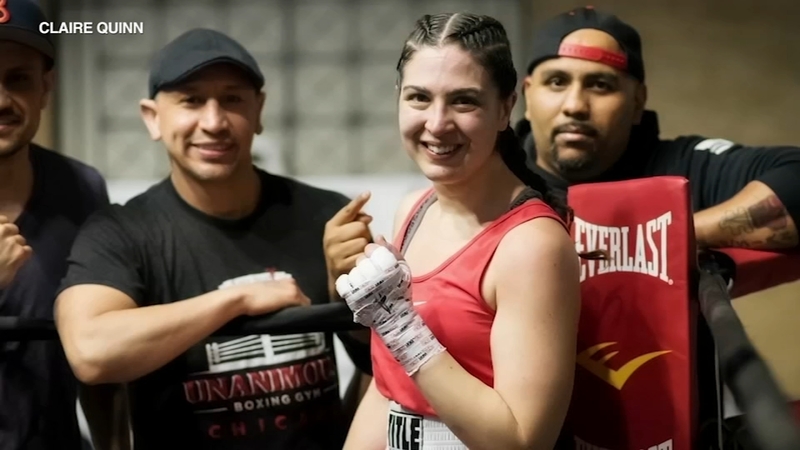 CHICAGO (WLS) -- A would-be robber got more than he bargained for when he attacked a Golden Glove boxer in Bucktown Sunday morning.

"She would stop me in my tracks with her right hand," said her trainer Lalo Beas.

Sunday morning, that would-be thief found out exactly what it feels like to be on the other side of Quinn's right hook.

"She was holding the phone with her left," Beas noted.

Quinn, 26, said she was walking south on Damen Avenue near North Avenue around 10:30 a.m., looking nothing like a boxer, when she said a young man who'd asked her for directions grabbed her shoulder, pushed her to the ground, demanded her phone and then punched her in the head.

She spoke with ABC7 Eyewitness News over the phone and said that punch was the last straw.

"I could have just given him my phone, but you laid your hands on me," she said. "I'm not going to take that."

"Right away she started hitting him wherever she could, and the nearest spot was the groin area," Beas said. "She was just relentless with as many punches as she could possibly throw."

The 152 lbs. boxer has only lost one fight, and laying on the street at the hands of a stranger with a teenage accomplice watching wasn't going to be her next loss.

"I guess the guy was standing over her, she was just punching right in the groin area," Beas said.

"He wasn't expecting me to do that and certainly not with that kind of force," Quinn said over the phone.

"He messed with the wrong girl, and she had some skills," Beas said.

The thief ran off empty-handed, in agony. Quinn said she sustained a minor concussion. She's recovering at her parents' home.