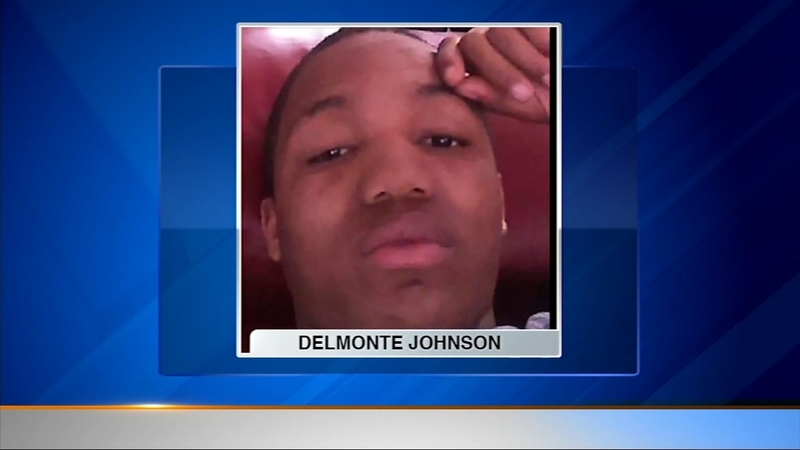 CHICAGO (WLS) -- Delmonte Johnson was in his brother's arms Wednesday night as he lay bleeding in the street of Chicago's Stony Island Park neighborhood.

Johnson, 19, was on the sidewalk in the 8600-block of South Euclid Avenue around 7:30 p.m. Wednesday when a tan-colored vehicle approached and someone inside opened fire, police said. Johnson, shot in the chest and stomach, was taken to the University of Chicago Medical Center in critical condition, where he later died.

Johnson's friends and family hosted a vigil and balloon release Thursday night to honor the anti-violence activist. The event was organized by advocacy group GoodKids MadCity and held at New Look Restaurant in the city's South Chicago neighborhood, a restaurant owned by the family of 15-year-old Hadiya Pendleton. She was shot to death in 2015, as she took shelter from the rain with friends at a park on Chicago's South Side.

Inside the packed restaurant, Cleopatra Cowley, Pendelton's mother, hugged Walker tightly. They now share a bond no parent wants. They have both lost children to gun violence.

Johnson was just outside his brother's basketball practice when he was shot.

"I lay next to my brother as he was dying in my hands," said Devirgo Johnson, the victim's brother. "My coach text me and said 'I need you to come to Jessie Owens Park to come and practice with me at 6 o'clock,'" Devirgo Johnson said. "Ten minutes, 20 minutes later, I turn around and he gone. Five minutes later, his friend that was with him ran back in there and came and got me."

Delmonte Johnson, an active volunteer with GoodKids MadCity was shot to death on Chicago's South Side Wednesday night.

"He laid there with his brother on the ground as he bled out from gunshot wounds... it's sad," Walker said.

Walker said a bigger tragedy lies in the fact that Johnson was killed by the very thing he was trying to stop: gun violence.

She said her son was passionate about this cause and was a dedicated volunteer with GoodKids MadCity. The group, led by young people of color, aims to end gun violence and press lawmakers to channel more resources to underserved communities. Johnson's family said he was putting together a fundraiser to help children go to Christian Camp.

"It's not fair that so many black and brown kids have to worry about being shot on their way to school or on their way home from school," said Alycia Moaton, of GoodKids MadCity.

Johnson's mother said she plans to continue her son's work. But for now, she is dealing with the fact he will never again come through her front door.

Johnson, right, with his mother.

Walker told ABC7 Eyewitness News her son was an exciting footwork dancer and an avid athlete, playing baseball and basketball and earning the nickname, "Sensation."

His family and young activists working to end gun violence across the country were upset by his death.

David Hogg, a survivor of the Parkland shooting, tweeted about Johnson's death Thursday morning, saying, "This has to end my heart goes out to Delmonte and his family together we will end this."

Delmonte Johnson was a 19-year-old who worked with @GKMC18 as an activist to end gun violence in Chicago,

last night he was shot to death.

This has to end my heart goes out to Delmonte and his family together we will end this. #RememberDelmonteJohnson https://t.co/9JVU4CjVvc

Johnson's mother said the level of gun violence in the city is "overwhelming." She believes the solution is to vote in politicians who advocate for gun control legislation.

Johnson's mentor, GoodKids MadCity Co-Founder Carlil Pittman, last saw the teen at an "anti-bait truck" event organized in response to a controversial Chicago police sting last month. He said he believes that education will help stem the violence and wants young people in the city to know that there's a world beyond their neighborhood.