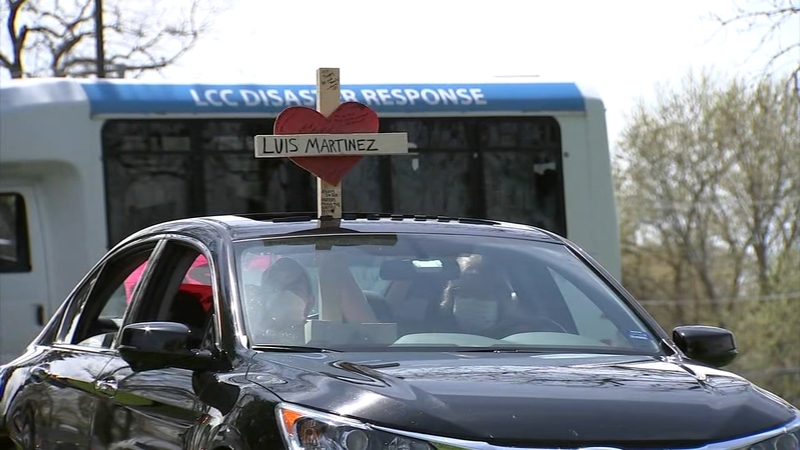 AURORA, Ill. (WLS) -- A tribute held in Aurora Friday sought to honor a man who has touched countless lives by bringing handmade crosses to crime scenes and disasters for more than two decades.

Greg Zanis has terminal cancer, but instead of waiting for a somber funeral to remember him, his family invited people to drive by and wave while he's around to appreciate it.

Police directed more than a mile-long line of cars waiting to drive by in Aurora on Friday.

Linda Regnier brought the cross Zanis made for her cousin, Luis Martinez, when he was killed four years ago.

"We love Greg. He has been a light in the darkest moments for families," Regnier said.

Crosses for Losses was born out of his own family tragedy.

Zanis first began making crosses in his shed to honor victims of violence near his Aurora home. But he eventually spread his mission, delivering crosses to the Sandy Hook Elementary School shooting site in Connecticut, as well as in Columbine, Colorado, and Las Vegas.

He was one of the first on the scene to deliver crosses when 10 children were killed in a fire in Chicago's Pilsen neighborhood two years ago.

Meanwhile, his crosses outside the Henry Pratt Company after a mass shooting in Aurora remain an enduring image.

"Greg does not understand what he means to people and this is the perfect way for us to show him how much we love him. How much we appreciate what he's done for us," said victim's advocate Dawn Valenti.

He asked the group Lutheran Church Charities to take over, and they're discovering just how large an impact Zanis made.