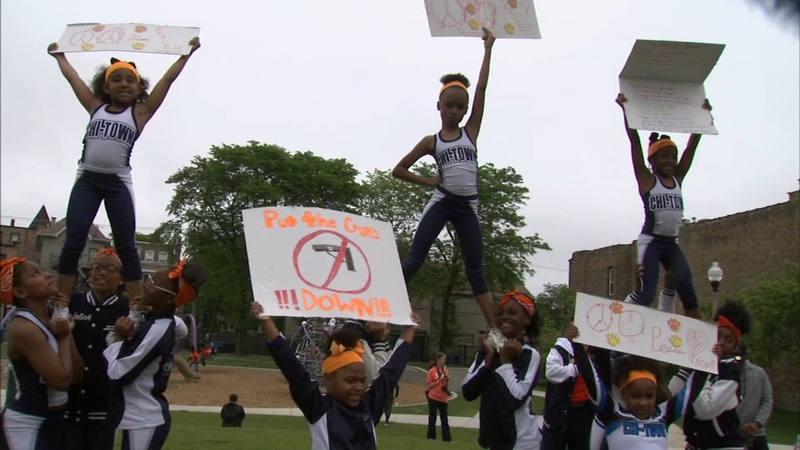 CHICAGO (WLS) -- People across the country are wearing orange this weekend, calling for an end to gun violence. It's a movement started by the family of Hadiya Pendleton, a Chicago teen killed five years ago.

Pendleton's family held a "party for peace" on Saturday, which would have been Hadiya's 21st birthday.

"Her name means 'gift from God,' and she truly was," said Kimiko Cowley Pettis, Hadiya's aunt.

Hadiya would have turned 21 years old Saturday. Her young life was cut short back in 2013 when she was shot to death, a week after performing with the King High School band at then-president Barack Obama's second inauguration.

"It's cool to have someplace to go that is symbolic of her and have peace be the overall theme," said Cleo Pendleton, Hadiya's mother.

Hadiya's favorite color orange was the color of the day as dozens gathered at the park named in her honor at 43rd Street and Calumet Avenue on the city's South Side for the annual "Wear Orange for Peace Party."

"This was a way for our community to celebrate her life as a symbol of how gun violence sucks the juice out of our community," said Pat Dowell, alderman of the 3rd ward.

The event grew out of the efforts of the honor student's friends, who started Project Orange Tree to try to stop gun violence.

Orange is the color hunters use for protection and for Pendleton's friends the color is a symbol to protect their generation from gun violence. They never imagined they'd end up inspiring a National Gun Violence Awareness Day.

"I think she would be really proud of us," Hadiya's father, Nate Pendleton, said.

St. Sabina's Father Michael Pfleger was also at the event.

"It's all over the country," she said. "If you look at the statistics, 96 people a day are killed with a gun."

Despite the stories of loss, there's a message of hope from those who know the sorrows of gun violence firsthand.