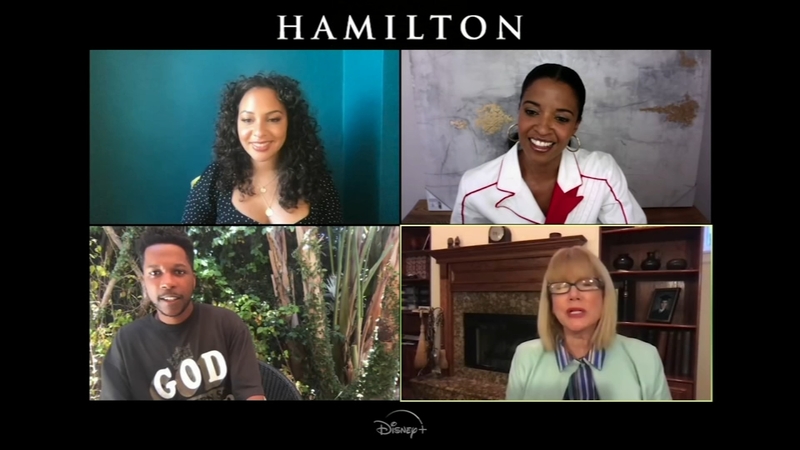 CHICAGO (WLS) -- The filmed production of "Hamilton" began streaming on Disney+ all over the world early Friday morning.

RELATED: Lin-Manuel Miranda talks about the phenomenon he created

Fans and critics are already giving it rave reviews. ABC7's Janet Davies spoke with a few of the cast members who helped turn it into a landmark event.

Leslie Odom Jr., who won a Tony for playing Aaron Burr, spoke about the show's relevance to the world right now.

"Hamilton" stsars Daveed Diggs and Christopher Jackson said the musical's message of revolution is relevant for the troubled moment we're living in.

"This is America," Odom said. "We are more American than we've ever been in lots of ways, and we are finally having conversations, long overdue conversations. I don't know what it's going to offer, but I hope it has something of value to say in this moment."

"It was taxing a bit because we just came off the Tonys," Cephas Jones said. "We were really tired. We were doing all this extra stuff, but we were also completely in a zone."

"Hamilton" is coming to Disney+ in a very different time than it was first released. Do the actors involved feel elated or conflicted?

Renee Elise Goldsberry, another Tony winner who plays Angelica Schuyler, said she's honored to be a part of something that will be savored by generations.

"The fact that my voice is a part of that, and specifically for something with a message that's so profound and so powerful," she said. "It's a dream come true."

"It was a high point," Odom said. "I'm going to keep trying, but I don't know if I'll ever be better than that."

"This Disney+ experience, being in people's homes, will be finally the achievement of that dream that we had that anybody that wants a piece of this history - a piece of this musical, a piece of this family- can have it in their home," Goldsberry said.