WLS
By Ravi Baichwal
WILLOWBROOK, Ill. (WLS) -- The Illinois EPA has ordered Sterigenics to cease operations in Willowbrook until their safety investigation into carcinogenic emissions is completed, as political pressure mounts to close the facility.

Sterigenics did not respond publically to this latest move by the state to address concerns residents in Willowbrook and surrounding towns have about emissions of ethylene oxide from the plant. But the political pressure is mounting to shut them down until it's known whether what they're doing inside their facilities is safe for the communities around them.

After an Illinois Senate Committee hearing to look into the matter was cancelled Tuesday at the Thompson Center, residents and representatives went outside to demand the closure of Sterigenics.

Among them was Hall of Fame baseball player Jim Thome and his family, who moved to Willowbrook seven years ago

"Within that short time my mom died of liver disease after never having drank, never smoking, was a lifelong vegetarian. My dad walks eight miles a day grieving his wife and all he gets to thank him for that a brain tumor, breathing that air, he lives less than a mile from Sterigenics," said Andrea Thome.

According to its website, Sterigenics operates 46 facilities in 13 countries. They use ethylene oxide to sterilize items such as medical devices, kits and gowns. The gas is passed through packaging that destroys microbial DNA. Residents fear that gas released in the atmosphere is harming them.

"This place does not belong in our community," Thome said.

The backlash has been brewing for months. Tuesday the Illinois Attorney-General told Sterigenics to stop operations until a full review of how they assess the risk can be completed

"Yes, IEPA sent a referral...We have been looking at this for weeks and in touch with US EPA and IEPA. We are looking at all of the legal options," the company said in a statement.

In July the company installed new pollution controls on its smokestacks called scrubbers. In August, a branch of the federal EPA reported that an elevated cancer risk exists for residents.

"Our standard here is that no elevated risk is acceptable of any kind so it is a step forward but we need to continue to advocate and fight on this matter," said State Sen. John Curran (R-41st District).

"As far as I am concerned the doors should be shut until we know whether or not what is being emitted from Sterigenics is within safe levels," said Rep. Jim Durkin, Republican House Leader.

"All these kids, the kids that I have coached, the kids could be affected and will be affected by this poisonous air that is around this community," said Jim Thome.

The Attorney General's Office said it needs a few days to file its order and get Sterigenics to close at least temporarily.

Governor Bruce Rauner's former private equity fund invested heavily in Sterigenics in 2011. He said he has long divested of his holdings, but he still has a financial interest through that company, GTCR, which was documented in a report he filed in May with a state ethics commission.
Report a correction or typo
Related topics:
health & fitnesswillowbrooklisa madiganenvironmental protection agencygas fumescancer
Copyright © 2020 WLS-TV. All Rights Reserved.
RELATED 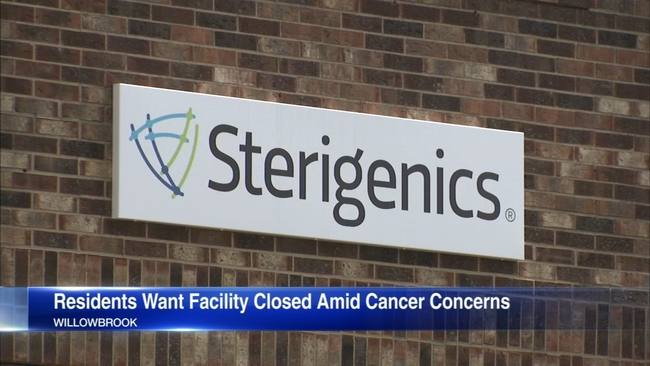