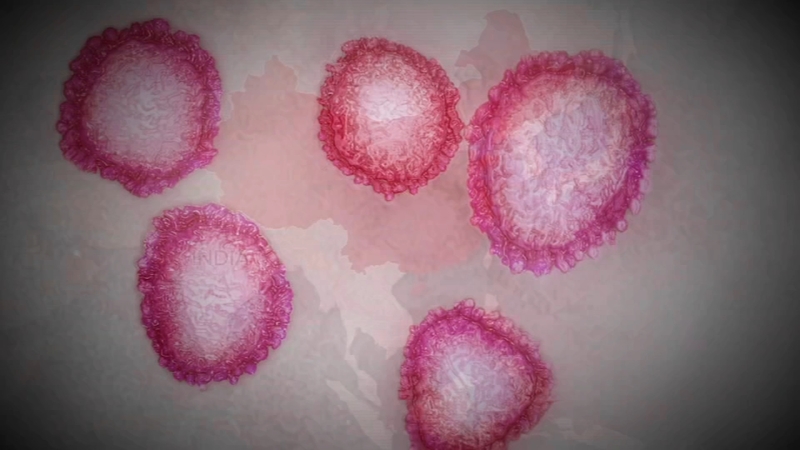 CHICAGO (WLS) -- President Donald Trump on Friday declared a public health emergency and announced heavy restrictions on travel from China to the United States as countries around the world work to quell the outbreak. More than 200 people have already died in China.

At the moment, officials from the president's coronavirus task force said the risk to the United States is low, and the restrictions are aimed at keeping it that way.

Americans returning from China will be allowed into the country, but will face screening at select ports of entry and required to undertake 14 days of self-screening to ensure they don't pose a health risk. Those returning from Hubei province, the center of the outbreak, will be subject to up to 14 days of mandatory quarantine.

The news was a comfort to some travelers at O'Hare Airport.

But the CDC has said its screening lab tests cannot definitively rule out if someone will contract the virus.

Dr. Anthony Fauci, infectious diseases chief at the National Institutes of Health, said one reason the U.S. stepped up its quarantine measures was an alarming report from Germany that a traveler from China had spread the virus despite showing no symptoms. Fauci contrasted it with the response to recent outbreaks of Ebola, which can't be spread unless someone is very ill.

General concerns about the virus has prompted the Chinese Mutual Aid Association to cancel their Lunar New Year event that was scheduled for Saturday morning at Truman College.

In a statement the group said they "feel it is important to be extra vigilant" about protecting people, and since the annual celebration at Truman College typically attracts more than 500 people, the majority of which are young or elderly, they are canceling the event out of an abundance of caution.

The young and the elderly are more vulnerable to viruses like coronavirus or the flu because of their weaker immune systems.

The annual Argyle Lunar New Year Parade will go on as scheduled.

A possible coronavirus patient in Northwest Indiana has tested negative for the disease.

In consultation with the Indiana State Department of Health, the patient was hospitalized and infection control protocols were implemented.

The CDC conducted lab testing, which came back negative for the virus, officials said. The individual's condition improved, and they were discharged Friday with no further risk to the public.

The seventh confirmed case of coronavirus was identified in the San Francisco Bay Area Friday. Santa Clara County health officials said the patient was an adult male who had been traveling in Wuhan, China. He became ill after returning home on January 24, traveling through San Jose International Airport. Officials said he did not leave his home after returning except to seek medical attention and had little contact with others.

Officials said he was not sick enough to need hospitalization and is currently in self-isolation at home.

At the same time, federal health authorities were recognizing that the test they're using to detect the virus isn't always dependable. Redfield said when it was used on some of the people currently in isolation, they'd test positive one day and negative another.

Health officials stressed normal hygiene is the best precaution to prevent the spread of coronavirus, including covering your mouth and nose when you cough and sneeze, and washing your hands regularly.

Meanwhile, the DuPage County Health Department said they were keeping an eye on people who may have had contact with the Chicago woman who was diagnosed with the virus.

RELATED: Coronavirus diagnosed in Chicago woman; 2nd case in US

In a statement, health officials said in part, "As part of the public health investigation and response, the staff of the DuPage County Health Department is contacting people who may have been exposed to the Illinois resident who was recently diagnosed" with coronavirus.

A virus is an organism that carries genetic information, causing infection and sometimes disease.

The woman, who is in her 60s, passed the virus to her husband in the first person-to-person transmission in the U.S., health officials said Thursday. Both patients are being monitored in isolation at the St. Alexius Medical Center in Hoffman Estates and remain stable.

"But I think it's justified," he said, noting the evacuees had been in a hot zone for the virus for a long time.

U.S. health officials issued a two-week quarantine order for the 195 Americans evacuated earlier this week from the Chinese city of Wuhan, provincial capital of Hubei province. It was the first time a federal quarantine has been ordered since the 1960s, when one was enacted over concern about the potential spread of smallpox, the CDC said.

"We understand this action may seem drastic. We would rather be remembered for over-reacting than under-reacting," the CDC's Dr. Nancy Messonnier said. None of the Americans being housed at a Southern California military base has shown signs of illness.

RELATED: US beefs up screening of travelers for new coronavirus from China

The National Health Commission reported 171 cases of people who have been "cured and discharged from hospital." WHO has said most people who got the illness had milder cases, though 20% experienced severe symptoms. Symptoms include fever and cough, and in severe cases, shortness of breath and pneumonia.

China has placed more than 50 million people in the region under virtual quarantine, while foreign countries, companies and airlines have cut back severely on travel to China and quarantined those who recently passed through Wuhan. Infected people don't show symptoms immediately and may be able to pass on the virus before they appear sick.

Since China informed WHO about the new virus in late December, at least 23 countries have reported cases, as scientists race to understand how exactly the virus is spreading and how severe it is.

The new virus has now infected more people globally than were sickened during the 2002-2003 outbreak of SARS, or severe acute respiratory syndrome, a cousin of the new virus. Both are from the coronavirus family, which also includes those that can cause the common cold.