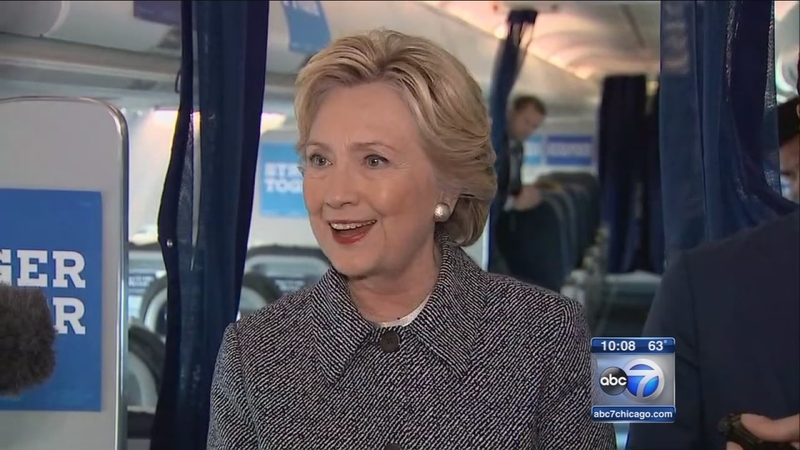 CHICAGO (WLS) -- Hillary Clinton cracked jokes about Libertarian candidate Gary Johnson and offered a blunt response to Donald Trump's threats to bring up her husband's past affairs on her way to Chicago for a fundraising event Thursday.

During a press availability on her plane after landing in Chicago, Clinton took a range of questions including one about third party candidate Gary Johnson who, on MSNBC Wednesday night, was unable to name a single foreign leader when asked by Chris Matthews who his favorite foreign leader was.

When Clinton was asked the same question, she joked sarcastically, "Oh, let me think!"

"No, I like a lot of world leaders, but one of my favorites is Angela Merkel," she then answered seriously.

When asked if third party candidates like Johnson concerned her, she refused to answer directly but said people should think carefully about their votes.

"Well, look, I'm just going to keep running my campaign and do everything I can to encourage people to get out and vote. Either Donald Trump or I will be the president of the United States, and so people have to look carefully in making their decision about who to vote for, because it will either be him or me and I am going to do everything I can to make sure it's me," she said.

Secretary Clinton arrived at her fundraiser at Chicago's Hyatt Regency with a police escort around 4:45 p.m.

"I think there's enough Republicans that are just going to do what I'm doing, which is to say say he's dangerous. This time you've got to leave the party and put country ahead of the party because we just can't let him be president," Webb said.

Clinton campaigned earlier in Iowa, where early voting begins today. She reiterated many of her points about Trump's failure to pay taxes and his failed businesses. But she also said this is not just about voting against Donald Trump.

"I want this election to be about something, not just against somebody," she said.

Most supporters spent $2,700 to attend the fundraiser Thursday, but some spent $150,000 to attend a VIP reception after her speech.

"There was a lot of enthusiasm. I was very impressed," said supporter Jim Weiss.