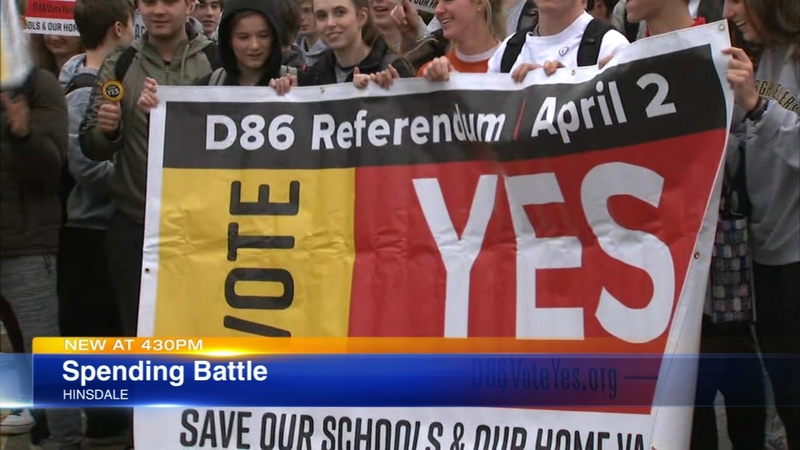 Some Hinsdale Central High School seniors cast an early vote Wednesday in support of a $138 million bond issue that school district officials say would pay for critical upgrades to both its high schools.

This is the third time the bond issue has been on the ballot for Hinsdale Township School District 86, which has two schools - Hinsdale Central and Hinsdale South. In November, voters rejected a similar $166 million measure.

If approved on April 2, the bond would increase property taxes an average of $300 a year for owners of a $500,000 home. If it fails, large cuts to extracurricular activities and other programs would go into effect in the next school year.

The cuts were approved by the school board in December. Members said they need to divert money from student programs in order to pay for much-needed infrastructure repairs at both high schools' aging buildings.

"I imagine if someone is living in a house built in the '50s you're not still using the same furnace that was installed in 1949. That's what we're doing at Central and also at Hinsdale South," said D86 Superintendent Bruce Law in an interview before the November elections.

Senior Olivia Kreischer voted Wednesday because her leadership club at Hinsdale Central is on the list for cuts.

"When I heard about that it was so heartbreaking because I joined as a sophomore. It was something that I came into high school knowing that I wanted to be able to be a part of. It has helped me grow as a person, as a leader so much and the fact that it could potentially be going away, it just kills me," she said.

District 86's high schools are among the best in the state.

Many residents, including Kari Galassi, moved to the district specifically for the schools.

"If this referendum does not pass, they will not be able to reverse the cuts to many of the activities and the sports. It's very important to our students. It's very important to our communities. You know the property values are really going to fall if this fails because our schools will not be competitive and people aren't going to want to come to this area," she said.

Opposition to the measure has mostly come from those communities that surround Hinsdale South.

"They've skipped spending out of the annual budget so that they could pay for more wasteful things, and now they want us to pay for it in a referendum, So you are not raising your property values by increasing your taxes. You are lowering your property values when you raise your taxes and you're not getting a better school district because you are already a great school district," said Zack Mottl, chairman of D86 Can Do Better.
Report a correction or typo
Related topics:
educationhinsdaleburr ridgeclarendon hillsdarienoak brookbondshigh schooltaxeselectionschool budget
Copyright © 2022 WLS-TV. All Rights Reserved.
TOP STORIES
Toddler found alone after Highland Park shooting lost both parents
Highland Park parade shooting victims ID'd
Highland Park shooting suspect charged with 7 counts of murder
Brookfield Zoo cleared after shelter in place order
Live Radar: Severe storms expected across Chicago area
Man shot girl after she threw water at McDonald's worker: prosecutors
Chicago Weather: More scattered rain Wednesday
Show More
BBB warns of possible scammers after Highland Park mass shooting
How to talk to kids about mass shootings: expert
Highland Park victims describe seeing alleged gunman on roof
Highland Park shooting suspect's social media littered with hatred
Taika Waititi talks new Marvel movie 'Thor: Love And Thunder'
More TOP STORIES News