Wife of man killed by Honolulu police demands justice: 'If it was me, I'd still be alive' 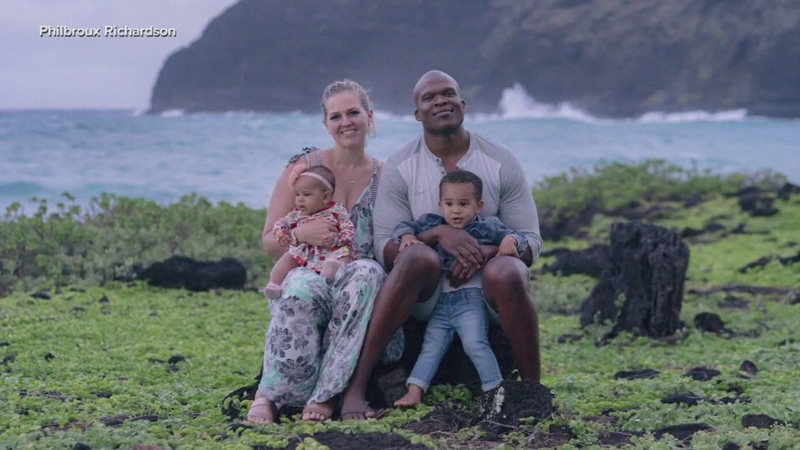 HONOLULU, Hawaii -- On the night of April 14, Lindani Myeni, a husband and father of two young children, was fatally shot by Honolulu police after entering a home he may have confused for a next-door public temple, according to a wrongful death lawsuit filed by his widow, Lindsay Myeni.

She is demanding justice in the wake of the shooting death of her husband, a South African rugby player who was unarmed when he was fatally shot by Honolulu police.

Myeni told "Good Morning America'" that her husband was going to a nearby temple the night he was killed. She said that when he plugged the temple's location into his phone using GPS, the directions sent him to a house next to the temple.

"I kissed him goodbye in the kitchen, that's my last interaction," Myeni said about her final moments with her husband before he went on a drive that night.

Myeni, a third-generation Hawaiian native, said the family decided to move to the island after previously living in Denver for a little over a year because, "Hawaii was home, Hawaii was aloha, its cultures all together, different races."

"I just never thought, I would think of Honolulu as a bad place, as a dark place ... it's just full of love and aloha," said Myeni. "To have this place be so dark, and to actually have this other side where our police are just like the rest of the mainland, it's like there's no safety, there's actually fear now."

Doorbell camera video obtained and made public this week by the Bickerton Law Group, which is representing the family of Lindani Myeni, shows a different camera angle about the events leading up to the deadly encounter with officers.

The footage shows that he arrived at a house, removed his shoes, entered the home and then quickly left after his presence confused the occupants. He repeatedly apologized.

The woman in the house then called 911. Over the phone, she sounds upset as Lindani Myeni is heard repeatedly saying, "I'm sorry" to the couple of tourists who were renting in the building.

In the video, he then puts his shoes back on and appears to go back to his car.

As Honolulu police arrive and head toward the car, the woman is heard yelling, "That's him! He's still in the car!"

"Get on the ground now," one officer is heard yelling as he approaches Lindani Myeni.

In the police body camera video, Lindani Myeni can be heard asking, "who are you?" in a seemingly confused voice. Shouting is heard and then police use a stun gun on him before shooting him four times.

After firing the gunshots, police can then be heard identifying themselves.

According to the family's lawsuit, he would not have known it was police shining bright lights in his eyes that night and likely mistook the house for a next-door temple open to the public.

In a press conference in April following the shooting, Honolulu police defended the officers' actions. According to a report from The Associated Press, Acting Deputy Chief Allan Nagata acknowledged officers didn't identify themselves before shooting, but said it was clear they were police, even in the dark. He said the officers were in a "fight for their lives."

On Thursday, Honolulu police told ABC News that they are investigating the shooting and the officers involved have been placed on "restrictive duty," which means their police powers have been removed and they're assigned to desk duty for now.

A New Jersey couple who rented the house, have now made a complaint to the FBI regarding "concerns that they were targeted because they're Asian," said Scot Brower, an attorney representing the homeowner and the tourists.

The couple "absolutely" did not know Lindani Myeni when he walked into the house without consent or permission, said Brower.

The lawyers representing the Myeni family said they were not aware of the details of the complaint at this time.

"Overall the sad part is that the 911 couple has not shown any remorse whatsoever and they have kind of retreated into this corner where they're viewing themselves as the victims," said Bridget Morgan-Bickerton, an attorney for the Myeni family.

Days before Lindani Myeni's death, his wife said that the couple received life-changing news when it was revealed to him that he was a Zulu prince of his hometown in South Africa. She said that he was looking forward to accepting his new role and returning home to help his community.

"He was just telling me all his ideas, we were inspired and excited," she recalled. "And then that drive to clear his mind like ended in death and it's just hard for me to even accept that he's not going to walk through the door right now."

Myeni said that she has not watched the videos of her husband's fatal shooting by police.

"I can't, I will never watch my husband be murdered," she said. "I can't visually just watch them murder my husband. This can't be my last memory."

She also said that she believes race played a part in her husband's death.

"One-hundred percent, I know in my heart if it was a white man ... if it was me, I'd still be alive. I'd be walking around," said Myeni.

"He has a Black Lives Matter shirt that has the names of the people who were murdered," she continued. "He never thought he was going to be the next name on the list and he was proud of George Floyd, that his life meant something."

Myeni, a 29-year-old widow now raising two young children as a single parent, is calling for justice following her husband's death. She said she wants to see multiple changes including police reform, accountability for the officers as well as the 911 callers and more widespread implicit bias teachings to counter racism.

"I would just love to see that change, because I think it's possible," she said.

Myeni said that even though "it's really hard to forgive right now," she would also like to extend an invitation to have dinner with the officers and the 911 callers "for them to see my beautiful kids."