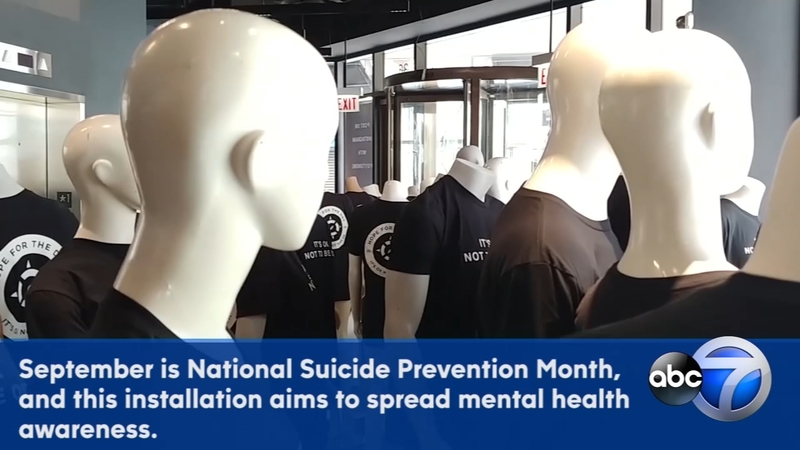 CHICAGO (WLS) -- Wading through a crowd of more than 100 mannequins just to get to work isn't convenient, but it's exactly what employees of ad agency Havas' Chicago office have to do through the rest of the month.

September is National Suicide Prevention Month, and to raise mental health awareness, Havas partnered with local nonprofit Hope For the Day to create a public installation of 121 mannequins in Havas' lobby - roughly one for each person who dies by suicide in the United States every day, according to statistics from the American Foundation for Suicide Prevention.

"It's a response to the uncomfortable truth that every single day in America, 121 individuals complete suicide," said Jason Peterson, chief creative officer and chairman of Havas Creative North America, in an emailed statement. "I knew we had to do something that couldn't be ignored, because ignoring uncomfortable truths does more harm than good."

Creating a physical representation of the 121 daily suicide victims provides a far more concrete and powerful image for people who may not have been personally affected by suicide, said Jonny Boucher, founder and CEO of Hope For The Day.

"One hundred twenty-one is not that big a number," Boucher said. "But when it's 121 mannequins standing in your way and making your life every single day a little bit more of an obstacle course, especially for the Havas employees as well as people coming off the street, it really shows you that it shouldn't have to be this way."

In the window facing the street is also a timer that constantly counts down from 40 seconds, representing the statistic that one person dies from suicide every 40 seconds worldwide.

So far, the organization has raised $6,039, according to its website, which means 49 mannequins are slated to be taken away.

"It's beautiful, because there's so many mannequins that are packed in down there," Boucher said. "...Just because we got some of them out doesn't mean the work's done."