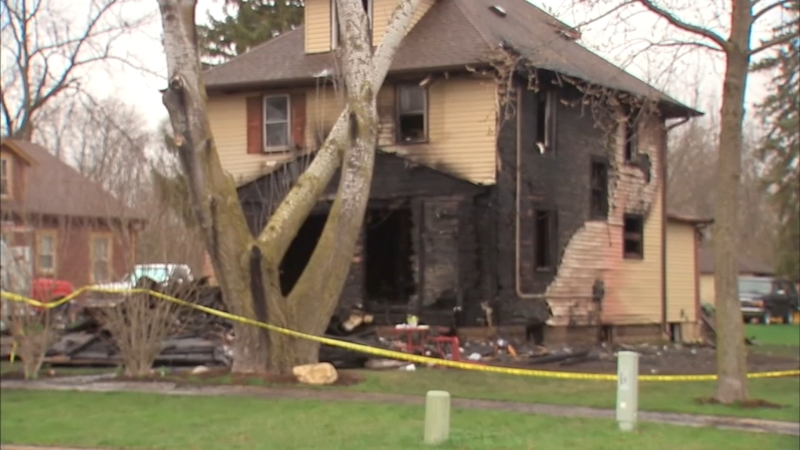 WEST CHICAGO, Ill. (WLS) -- A man died and another was transported to a hospital after a house fire in West Chicago Wednesday night.

The fire broke out at about 10 p.m. A total of three people were in the three-story house in the 100-block of West Grand Lake Boulevard in West Chicago

Fire officials believe the fire began in the front of the home and was made worse by the wind and open windows. The porch collapsed and the rest of the home was destroyed.

"We tried initially and the fire fighters got pushed back by the amount of fire that was in the windows," said West Chicago Fire Chief Patrick Tanner. "We regrouped, put a little bit of water on the fire and then made the attempt for the rescues and that's when we made the one rescue."

They were able to get a 92-year-old man in a second floor bedroom to safety. He was taken to a local hospital. His ex-daughter-in-law who lives with him got out on her own, running to Cheryl Galloway's house.

"She heard something, so she came downstairs and the front end was so full of smoke and flames that she says she didn't even know how she got out," Galloway said.

The woman's 53-year-old boyfriend died in an upstairs bedroom. Fire officials say he went to bed early for work. Neighbors said someone driving by the house on West Lake Boulevard saw it on fire and started banging on the doors, but by that time the flames had a head start.

Meanwhile, Ken Veriga rushed over to help find the family dogs, tracking down one of them named Bo.

Veriga emotional talking about a family he knew very well.

"Just people I love...they brought me into their family," he said.