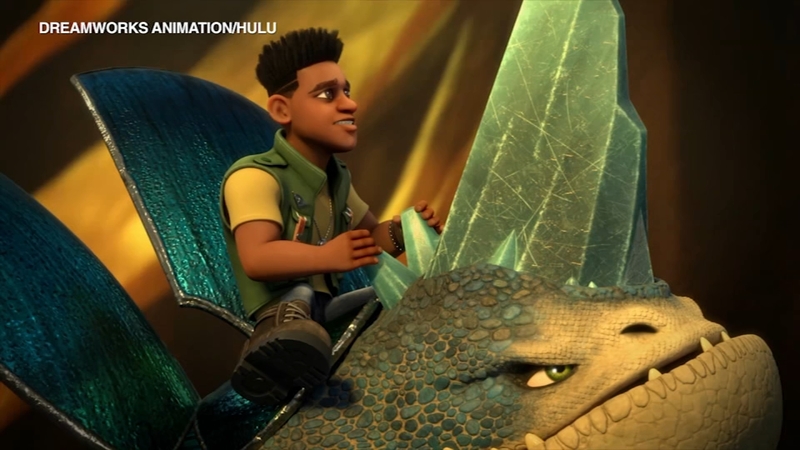 CHICAGO (WLS) -- Marcus Scribner is best for his role as Andre Junior on ABC's "Black-ish."

A deep, mysterious crack on the surface of the earth reveals an astounding discovery. Dragons aren't ancient, mythical creatures at all. They're hiding from humanity. Scribner voices D'Angelo, one of the kids who has to keep a secret to protect the dragons.

"The character that I play is D'Angelo, he's kind of the heart and soul of the group, he makes sure that everybody's safe and is following the rules in the Dragon code, but he's also big and burly and the muscle of the group," said Scribner.

"Growing up I watched a ton of animated series, I watched a lot of anime, so getting to lend my voice to animated characters is always exciting. I feel like it's extremely expressive you really get to go in the booth and just let loose, so it's kind of a dream come true to get to be in this line of work as well as live action," said Scribner.

"Black-ish" begins its final season is less than 2 weeks. Marcus has been on the series since he was just 13.

Scribner said the show is important to Black American culture.

"You often times don't get a realistic interpretation on television, and there's a lot of caricatures of us, but nothing told by us so we were the first to start doing that in this modern era, in a sitcom format and made it enjoyable and fun and we talked about stories that are important to us," Scribner said.

Scribner said that while he was born in Los Angeles, he holds a deep appreciation for Chicago.

"Chicago I miss you I want some deep dish pizza right now, I love you all, thank you guys for supporting us throughout the years, every time I come to Chicago, the amount of love you show me is amazing, beautiful city," said Scribner.
Report a correction or typo
Related topics:
arts & entertainmenthulutelevisionblack'ishabc
Copyright © 2022 WLS-TV. All Rights Reserved.
TOP STORIES
Death toll rises to 21, mostly children, in TX school shooting
Uvalde school shooting: What we know about 19 kids, teacher killed
Republican candidates for Illinois governor face off in 2 forums
Father of Texas yoga instructor accused in cyclist's murder speaks out
Chicago expected to move to 'high' COVID level by Friday, Arwady says
Gary teen killed in shooting identified by family
Chicago Weather: Showers and storms Wednesday
Show More
Woman shot near CTA Red Line stop on South Side
Biden says 'we have to act' after Texas school shooting
1 killed in 10-vehicle crash on I-294 in Glenview
Long COVID symptoms mainly affect women in their 40s, study finds
Watch Steve Kerr's raw, emotional plea after Texas shooting
More TOP STORIES News