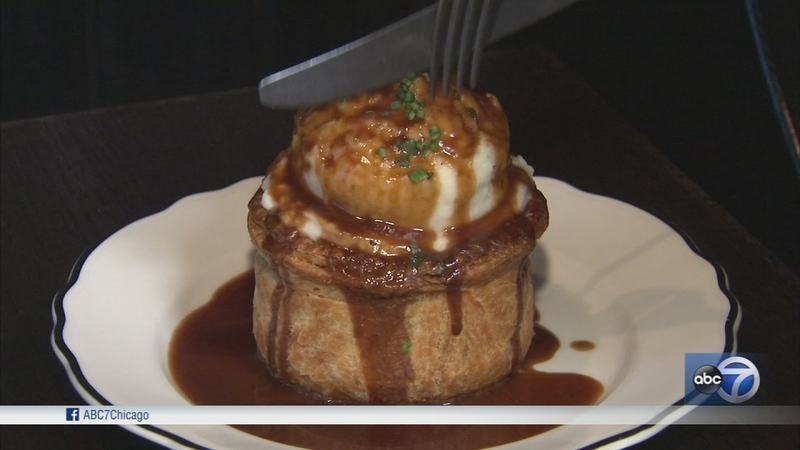 CHICAGO (WLS) -- One of the Bridgeport neighborhood's favorite British cafes has moved to Pilsen, greatly expanding its offerings.

Now, more of a formal British pub, you can eat - and drink - pretty well, almost all day long.

Fans of Pleasant House have always loved their British pies - stuffed with curried chicken or tender beef - maybe topped with a dome of mashed potatoes... but now they'll find those pies, along with a full British pub menu, at their new spot: Pleasant House Pub.

At dinner we have a little bit more of an expanded pub menu, so some appetizers, we've got a burger on the menu every day, mac and cheese; some nice, hearty pubby items, specials that go great with beer," said owner Art Jackson.

Indeed. That mac is combined with a vintage cheddar, as well as some ale, to make it more of a "beer cheese" style mac. Brown onion gravy is rich and hearty, poured over some bangers, that is, sausages, and a bubble & squeak cake, consisting of potatoes, cabbage and leeks.

"We bread that so it's nice, crispy, fluffy mash cake to go along with our bangers," Jackson said.

Fish and chips on Fridays of course, with housemade tartar sauce, and a filling Scotch egg for a beer snack.

"That's a medium-boiled egg we call it. Wrapped in our house pork sausage rolled in breadcrumbs and deep-fried," he said.

The beers are truly unique. Some from overseas, others, just well-sourced, thoughtful domestic brands.

"Really beautiful ales. Some from England, like our cask ales, which are certified "real" ales, so we have a couple of beer engines on the bar," said Jackson.

Jackson says the goal has always been to create dishes that would complement whatever was coming from behind the bar.

One of the results of Pleasant House's new location means not only a larger dining room and larger kitchen, but also a larger menu which means decisions...much more difficult.

EXTRA COURSE: ABC7 food reporter Steve Dolinsky talked about some of the traditional British desserts at Pleasant House, including a mini-trifle, a sticky toffee pudding and some of his favorite cookies in town.
EMBED More News Videos

ABC7 food reporter Steve Dolinsky talked about some of the traditional British desserts at Pleasant House, including a mini-trifle, a sticky toffee pudding and some of his favorite cookies in town.