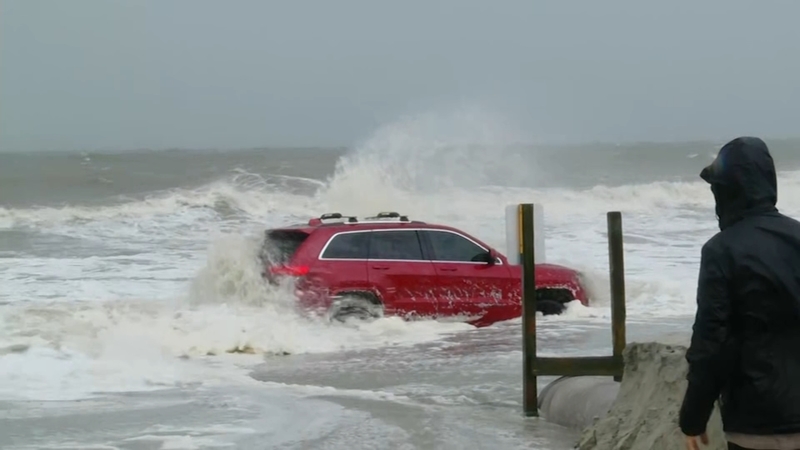 The backstory of the now-infamous red Jeep in the surf

MYRTLE BEACH, S.C. -- New details emerged Thursday night about one of the more light-hearted stories that got people talking in the midst of Hurricane Dorian.

Images of a red Jeep stuck in the sand at Myrtle Beach quickly became one of the most iconic images from the Carolinas in this storm. Several people caught the Jeep on camera as it appeared to be at serious risk of being swallowed up into the sea.

On Thursday morning, Myrtle Beach police were called about the Jeep left on the beach.

Police said they found the car locked and abandoned in the surf.

Images of a red Jeep stuck in the sand at Myrtle Beach quickly became one of the most iconic images from the Carolinas in this storm. Here's how it unfolded.

The owner told WMBF that his cousin borrowed his Jeep Thursday morning.

He said his cousin wanted to drive onto the beach to get a video of the sunrise before the storm.

But he ended up getting stuck in the sand, and then as the weather got worse, it became too dangerous to try and remove it.

And people being what they are, they started coming out to take photos and poke fun at the situation.

Many posted videos online, including one of a bagpipe player cranking out "Amazing Grace," a hymn often heard at funerals.

Meanwhile, Myrtle Beach Police Department said it was aware of the situation but was unable to safely get anyone to the beach to tow the vehicle away until Friday morning.

To add to the tumult, the Jeep's owner said he didn't even know something was wrong with his car until the police showed up at his house.