Sally weakens to tropical depression as it brings 'torrential rains' over Alabama, Georgia 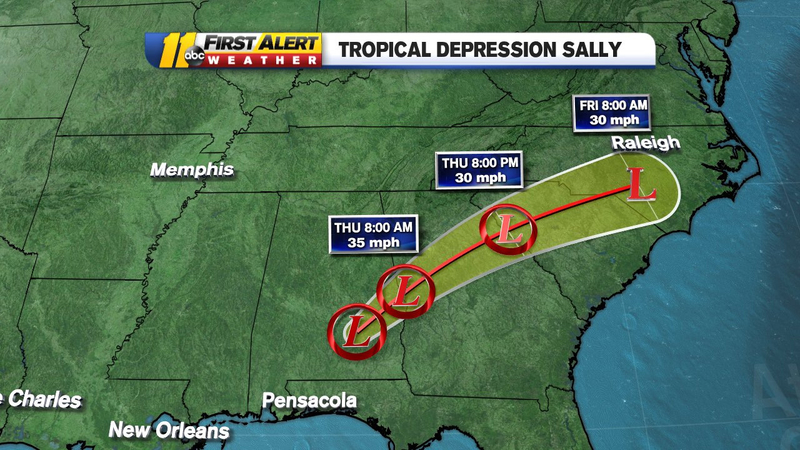 Sally weakens to tropical depression as it moves further inland

GULF SHORES, Ala. -- In a single day, Sally has once again downgraded; this time to a tropical depression

A slow-moving Hurricane Sally made landfall on the U.S. Gulf Coast Wednesday morning, threatening dangerous flooding from the Florida Panhandle to Mississippi and well inland in the days ahead.

The storm hit Gulf Shores, Alabama, at approximately 6 a.m. as a Category 2 hurricane. As of 2 p.m., Tropical Storm Sally is moving northeast at 9 mph with winds up to 35 mph.

Forecasters say that the storm's speed, not its strength, puts communities in its path in jeopardy.

As of Wednesday morning, the storm is headed north-northwest at a dawdling 3 miles per hour, a pace that's likely to dump an incredible amount of rain over an extended period of time. The National Hurricane Center warns Sally could bring "historic life-threatening flash flooding."

3am Wed Update on #Sally Now strengthening to a CAT 2 and approaching landfall along the AL/ FL line. It will bring us rain Thursday & Friday #TropicalUpdate #alwx #flwx pic.twitter.com/JFbA3pB004

Sally is also expected to generate an extremely dangerous and life-threatening storm surge. Storm surge warnings have been issued from Port Fourchon in Louisiana to the Mississippi/Alabama border.
Sally is the earliest "S" storm in recorded history, and this year's hurricane season is on pace to be the most active of all time.
Sally is just one of four named storms and seven active systems in the Atlantic storm basin. Paulette, Teddy, and Vicky are the others.

Hurricane Teddy is now a Category 2 hurricane and is projected to strengthen to a Category 3 storm Thursday and Category 4 Friday. Fortunately, Teddy is expected to stay out to sea.

Tropical Storm Vicky formed Monday west of the Cabo Verde Islands. It is not expected to cause a serious impact and will be short-lived.

Out in the Atlantic, Hurricane Paulette has officially fizzled out to the ocean. The eye of Paulette moved over Bermuda on Monday morning.

The next storm to become a tropical storm will be named Wilfred, the final name before moving on to the Greek alphabet.

Here's what happens if we run out of names.
EMBED More News Videos

It turns out the list starts over, with the Greek Alphabet. We'll look at the first six names on that list:

The last time that happened was 2005, which is the current record holder for the most active hurricane season ever.