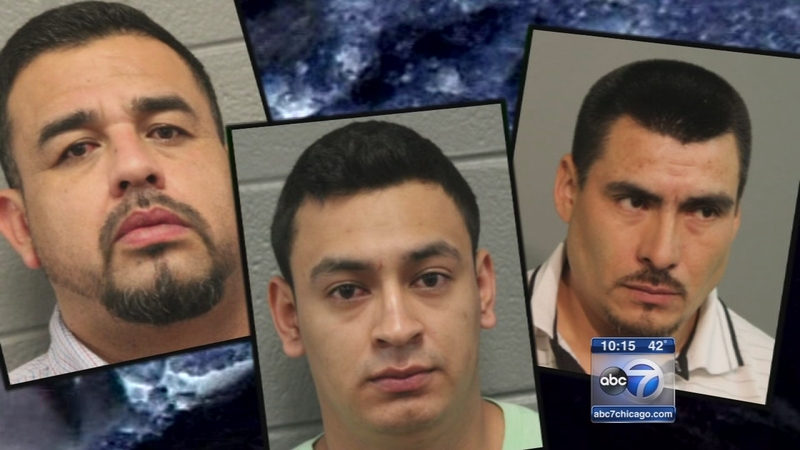 CHICAGO (WLS) -- Law enforcement officials in Chicago are incensed that three men charged with having millions of dollars in heroin and cash were released by a Cook County judge. Now, those men have now disappeared.

With nothing more than a promise, the three drug suspects - all Mexican nationals - were allowed to go free in a case that has riled law enforcement.

Investigators say the men are not just street dealers. They tell the I-Team that at least two of three have connections to a Mexican drug cartel and should have faced high bonds. Instead, they are free on I-Bonds and are now fugitives.

Police say a ravenous appetite for heroin has put overdoses at an epidemic level this year. Bricks of drugs with a street value of at least $4 million can fetch as much as $12 million on the street depending on how dealers cut and package the heroin.

"You can just imagine, do the numbers, of how much damage that does on the streets," Cook County State's Attorney Anita Alvare said.

At the end of October, authorities had three Mexican nationals under surveillance in a section of North Austin called Whiskey Point.

Investigators said the men were observed switching cars on the block. As the trio walked toward a residential building, drug agents said they approached the men and got permission to search the apartment where they claim to have found almost $900,000 in cash and 25 kilos of heroin.

"That's a lot of drugs, not for personal consumption. So when you have cases like this with such a large amount and a large street value amount our assistants usually ask for a cash bond and in addition to that we ask for a source of bail bond so the defendant would have to show that if he makes bond, that it's not coming from drug dealing money. That didn't happen here," Alvarez said.

Cook County Judge Maria Kuriakis Ciesel ruled against prosecutors and gave the men I-bonds; the judge questioning the legality of the apartment search.

"But the decision of whether to release or whether to detain and what kind of bond to impose really should turn on two factors: does this person pose a threat to public safety and/or is this person a risk of flight," says Gil Soffer, ABC7 Legal Analyst. "They are Mexican nationals engaged in heavy duty drug dealing with evidence found of very high street value; yes, that is they type of case that typically poses a risk of flight which often result in an order of detention or at least a cash bond."

One of the suspects, Ramiro Ramirez-Barcenas, was just in the wrong place at the wrong time according to his lawyer.

The public defender who represents the two other drug suspects says it is "very surprising that they were given I-bonds, especially because they're not U.S. citizens." She says she hopes they are safe.

There is another court date for the three in mid-December. Alvarez says prosecutors don't see a "high probability" the men will show up.