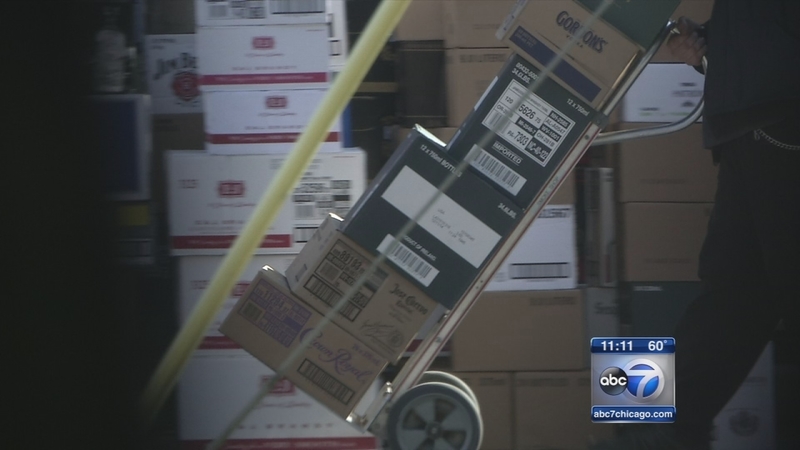 CHICAGO (WLS) -- Industry leaders say illegal "special deliveries" from liquor stores in Indiana to retailers in Illinois are costing Illinois millions in lost tax revenue at a time when the state is broke.

Alcohol is much more expensive in Illinois than it is in Indiana. And it is even pricier in Cook County, where the tax rate on liquor is more than five times higher than it is in the Hoosier state.

The ABC7 I-Team kept watch on one suspected store for special deliveries.

ABC7's Chuck Goudie: "Hey, where's the party?"
Employee: (Laughs)
Chuck: "Where is this stuff going?"
Employee: "It's going to the customer."
Chuck: "Is it going to Illinois?"
Employee: "I wouldn't be able to tell you."

Ten times during the past two months, the I-Team watched Kennan Liquors. Every time, we saw cases of liquor stacked outside behind the store. Located just across the Illinois-Indiana border, we witnessed what appeared to be dozens of transactions happen out back.

Trucks pulled up, dozens of boxes of liquor were loaded, and then on the six occasions the I-Team followed them back into Illinois they went.

Illinois and Indiana state laws prohibit retailers from selling to other retailers under most circumstances. Those sales could also be against federal law.

The I-Team showed the video to the executive director of the Wine and Spirits Distributors of Illinois.

"They are the retailer and they should only be selling to the consumer," said Karin Lijana Matura, Wine and Spirits Distributors of Illinois.

"In terms of the border shipments that are coming across the borders, that appears to us to a be a number between $5-7 million a year in lost taxes," said James Webster, Wine and Spirits Distributors of Illinois attorney.

Both states have a three-tier regulation system. Manufacturers sell to wholesalers who, in turn, sell to retailers.

"That middle tier is there to collect the taxes for the state," Matura said.

When the I-Team asked Kennan Liquors' owner about the law, he claimed that Indiana state officials are fine with what he is doing.

But now it appears they may be looking into it. In an April 7 e-mail obtained by the I-Team, the state excise police say they "will be investigating the illegal sales of permit holders in Indiana."

Just before Memorial Day, the I-Team saw a SUV at Kennans load up and drive directly to E&B Liquors in Tinley Park. The vehicle is registered to the owner's son, Dil Patel, who appears to be taking the liquor out of the truck and bringing it into the store.

Chuck: "We have seen trucks pick up liquor from a store in Indiana, bring it here and unload it here and bring it in. What do you know about that?"
Dil: "Nothing. I didn't even know that was happening."

Owner Rush Patel also says he doesn't know anything about this or any other special deliveries.

Chuck: "Do you purchase some of your liquor from a store in Dyer, Ind.?"
Rush: "No. But I have a van and a lot of people use my van, so I don't know."

The I-Team also followed the truck from Kennans directly to the Wooden Keg in south suburban Harvey.

A day later, the I-Team watched the truck load up at Kennans and drive straight to Jeff's Food and Liquor store on Chicago's South Side.

Both store owners turned down requests for an interview.

The incentive is there for retailers to buy across the border.

A six-bottle case of vodka that costs $167 in Indiana costs $226 in Illinois and is $18 more than that in Cook County.

"If there was a recall, we would not be able to get the products off the shelf in an efficient manner," Matura said.

Back in Dyer, Spurlock says it is none of his business what customers do with his product.
Chuck: "Well you don't think this is going to someone's house for a weekend party, do you?"
Spurlock: "I don't really care."
Chuck: "Would you care if it was against the law?"
Spurlock: "It's not against the law for us to sell it. What they do is their business."

Officials from both states denied requests for interviews, but say they take allegations of illegal retail liquor sales seriously.